Update Required To play the media you will need to either update your browser to a recent version or update your Flash plugin.
Kane Farabaugh
December 19,2014


CHICAGO— President Barack Obama still has two years left in his term in office, but the effort to establish his post-presidential library is already underway. The bid for the Obama Presidential Library is down to four locations in three states -- New York, Hawaii, and Illinois. Each of them played an important part in the president’s life before he reached the White House.

As she works behind her desk at the University of Illinois Chicago campus, Dean of Libraries Mary Case’s office looks out onto what she hopes is the future of her institution -- the potential home of the Obama Presidential Library.

She thinks the location near downtown Chicago is an attractive reason to put the institution on her campus. The other?

“Diversity -- UIC has one of the most diverse student populations in the country, and many of our students have benefitted from the DREAM Act,” she said.

That’s part of UIC’s pitch to the Obama Library Foundation, a non-profit group formed to plan, develop, and raise money for the president’s future library, museum, and foundation.

“The project, they are estimating, with the library, museum, and institute offices, is around $500 million,” Case said.

Such a facility would be an economic and prestigious boost to the institution hosting it. While UIC is in Chicago, the place Obama called home before the White House, Mary Case admits it lacks a personal connection to the man and his family. 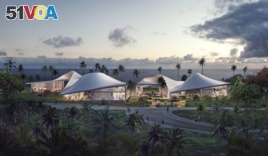 This undated artist rendering provided by Stryker Weiner & Yokota Public Relations, Inc., shows one of the proposals for a Barack Obama presidential library that a Hawaii group wants to build.

“There are no individuals that we are aware of that have connections to him,” she said.

UIC’s competitor in Chicago to win the Obama library bid does have that personal connection. Several of the president's friends and former advisors work at the University of Chicago on the South Side.

U-Chicago is also where the president worked as a constitutional law professor before his entry into politics.

If it comes to Chicago, Dan Weinberg, who owns a bookshop dedicated to another famous president from Illinois -- Abraham Lincoln -- says it would be the first presidential library in the National Archives system located in the state.

“It’s strange that we don’t have a library, and I think -- if the main rival is New York -- all bets are off if the Obamas move to New York,” he said.

New York is home to Columbia University, where Obama attended school as an undergraduate. Columbia is in the running to have the first presidential library in New York City.

The fourth location -- Honolulu -- is the president’s birthplace. He is the only president born in the state of Hawaii. Its plans include a beachfront facility available to the eight million tourists who visit the state every year.

But Weinberg says one benefit Chicago has going for it no one else can match is Obama’s connection to the legacy of President Lincoln.

“He, Obama, is the culmination of Lincoln’s promise of Emancipation,” he said.

The decision ultimately rests with the president. But, if he decides to build his library outside Chicago, all is not lost for the Windy City.

Film Director and Star Wars creator George Lucas plans to build the Lucas Museum of Narrative Arts along the city’s lakefront. The $300 million facility is set to open in 2018.