Update Required To play the media you will need to either update your browser to a recent version or update your Flash plugin.
By VOA
Feb 11, 2018


The U.S.-Argentine relationship is growing stronger every day, said Secretary of State Tillerson on a recent visit to Buenos Aires.He stressed that Argentina has an important role to play in building a more secure and prosperous hemisphere.

Nowhere is that more important than in Venezuela, said Mr. Tillerson. "Argentina has reemerged as a strong advocate for democracy and the rule of law, and we in particular welcome Argentina's leadership to promote democracy, including, in particular, in Venezuela. . . .We simply cannot allow and stand idly by to see a total destruction of democracy in Venezuela. The Venezuelan people deserve better."

Secretary Tillerson noted that Argentine President Mauricio Macri is leading Argentina to a build a long-term foundation for greater prosperity, and the United States is committed to promoting economic prosperity for both countries. In addition to fostering mutual trade and investment both countries agreed to strengthen the partnership to combat transnational criminal organizations, counter-narcotics efforts, money laundering, and terrorist financing. 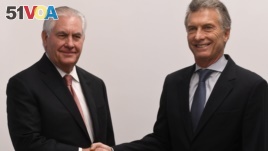 The United States welcomes Argentina's return to global leadership and wishes them success in leading and hosting this year's G20 summit. "We very much look forward to participating, and we know it'll be an important agenda that Argentina will put in place," said Secretary Tillerson.

The Secretary also thanked Argentina for their strong statements of support in the international efforts to denuclearize the North Korean regime of Kim Jong-un.

The United States looks forward to working with Argentina in the months ahead to promote democracy and the rule of law in the Western Hemisphere along with encouraging free and fair trade, and fighting transnational crime.