Tillerson on Fighting Terrorism in Africa

Update Required To play the media you will need to either update your browser to a recent version or update your Flash plugin.
By VOA
Mar 9, 2018


“The long reach of terrorism threatens to steal the future of countless Africans,” said Secretary Tillerson in a recent speech.In the last year alone, thousands of Africans have died at the hands of terrorists.

In response to this growing threat, the United States sanctioned seven ISIS-affiliated groups, including ISIS-West Africa and ISIS-Somalia, and their leaders, in an effort to cut off the resources that these groups use to carry out attacks. 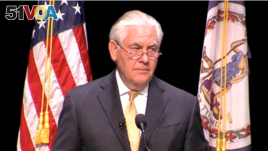 “To prevail against such evil forces,” said Secretary Tillerson, “the United States has committed to working with African partners to rid the continent and the world of terrorism by addressing the drivers of conflict that lead to radicalization and recruitment in the first place, and building the institutional law enforcement capacity of African nations.”

Terrorism knows no borders. “In the Sahel and the Lake Chad Basin, Boko Haram, ISIS-West Africa, al-Qa'ida in the Maghreb and other groups are adaptable, they're resilient, and capable of launching attacks throughout the area,” noted Secretary Tillerson. Regional cooperation is crucial to disrupting those attacks and denying these terrorist organizations the capability to plan and carry out attacks in the future.

The nations of Burkina Faso, Chad, Mali, Mauritania, and Niger, also known as the G5 Sahel, are pooling their expertise and resources to fight terrorism. To support their efforts, the United States has committed $60 million in security assistance to enable G5 Sahel countries to counter terrorism across the region.

There are no quick fixes to the terrorist threat, but the United States is committed to meeting the challenge head on in partnership with African countries, so the continent ultimately can become a place of prosperity, freedom, and safety.