Update Required To play the media you will need to either update your browser to a recent version or update your Flash plugin.
By VOA
Nov 1, 2017


On his recent visit to Iraq, Secretary of State Rex Tillerson congratulated Prime Minister Haider al-Abadi on his country's military victories over ISIS, including the liberation of Mosul last July, and the recent liberations of Hawija and Tal Afar. “These are all very important victories, and we applaud the efforts on the part on the Iraqi forces to defeat Daesh,” said Mr. Tillerson.But there is still more that has to be done to ensure that ISIS is defeated once and for all and is eliminated from all of Iraq.

Secretary Tillerson noted with concern “the recent differences that have emerged between the Kurdistan Regional Government and the Iraqi central government.” He said, “We encourage both parties to enter into discussion and dialogue. I think if both parties commit themselves to a unified Iraq, to the Iraqi constitution, I think all differences can be addressed and the rights of all can be respected and Iraq will have a very secure and a prosperous future.” 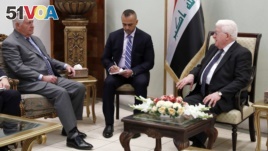 The United States believes the newly created Coordination Council, which includes Iraq and Saudi Arabia, is an important milestone in restoring relationships between Iraq, the Gulf Cooperation Council countries, and Saudi Arabia. “This engagement,” said Secretary Tillerson, “is extremely important for the Iraqi people [Sunni, Shia, and Kurds] that they are able to now reintegrate with their Arab neighbors.” This renewed cooperation should lead to economic development for the people of Iraq and strengthen the security and stability of the region.

The United States will do its part as well by looking for ways to increase economic investment in Iraq. The United States, said Secretary Tillerson, “looks forward a great partnership between Iraq and the U.S. for many years to come.”