Tillerson and Mattis on North Korea

Update Required To play the media you will need to either update your browser to a recent version or update your Flash plugin.
By VOA
Aug 16, 2017


North Korea's bellicose actions have escalated tensions between North Korea and the United States in recent months to levels not experienced since the Korean War.

In response, the Trump administration, with the support of the international community, is applying diplomatic and economic pressure on North Korea to achieve the denuclearization of the Korean Peninsula and a dismantling of the regime's ballistic-missile programs. 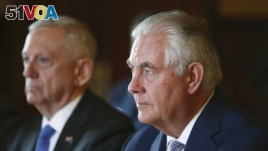 "We are replacing the failed policy of 'strategic patience,' which expedited the North Korean threat, with a new policy of strategic accountability," said U.S. Secretary of Rex Tillerson and Secretary of Defense Jim Mattis in a recent opinion editorial.

"Our diplomatic approach is shared by many nations supporting our goals, including China, which has dominant economic leverage over Pyongyang," wrote Secretaries Tillerson and Mattis. "If China wishes to play a more active role in securing regional peace and stability. . .it must make the decision to exercise its decisive diplomatic and economic leverage over North Korea," said Tillerson and Mattis.

The United States urges all nations to honor their commitments to enforce U.N. Security Council sanctions against North Korea and to increase diplomatic, economic and political pressure on the regime, specifically through the abandonment of trade, which finances the development of ballistic missile and nuclear weapons.

While diplomacy is the preferred means of changing North Korea's course of action, it is backed by military options. Any attack will be defeated, and any use of nuclear weapons will be met with an effective and overwhelming response, wrote Tillerson and Mattis.

In the meantime, South Korea's new government is moving forward with the deployment of U.S. Terminal High-Altitude Area Defense against the threat – a move the U.S. commends.

China's Security Council vote was a step in the right direction. But the region and world need and expect China to do more, said Secretaries Tillerson and Mattis.

The U.S. is willing to negotiate with Pyongyang. But only if it immediately ceases its provocative threats, nuclear tests, missile launches and other weapons tests.

North Korea now faces a choice. Take a new path toward peace, prosperity and international acceptance, or continue further down the dead alley of belligerence, poverty and isolation. The U.S. will aspire and work for the former, and will remain vigilant against the latter.