Update Required To play the media you will need to either update your browser to a recent version or update your Flash plugin.
By VOA
Mar 1, 2017

"Although our two nations share a long history, our visit was forward-looking, focusing on common interests that would advance security and economic well-being," said Secretary Tillerson.

At times, he noted, "two strong sovereign countries. . .will have differences. We listened closely and carefully to each other as we respectfully and patiently raised our respective concerns." 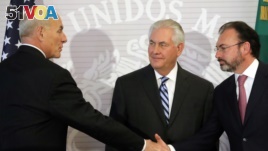 Secretary Tillerson said that both countries "reiterated [their] joint commitment to maintain law and order along our shared border by stopping potential terrorists, and dismantling the transnational criminal networks moving drugs and people into the United States. Similarly, we underscored the importance of stopping the illegal firearms and bulk cash that is originating in the United States and flowing into Mexico. There is no mistaking," said Secretary Tillerson, "that the rule of law matters along both sides of our shared border."

The United States recognizes "existing U.S.-Mexican cooperation to curtail irregular migration, both by securing Mexico's southern border and by supporting efforts of Guatemala, Honduras, and El Salvador – through the Alliance for Prosperity and working with organizations such as the Inter-American Development Bank – to reduce violence and stimulate economic opportunity in the region."

Finally, the United States and Mexico, said Secretary Tillerson, "universally agreed on the importance of strengthening existing institutional mechanisms. The meetings were the continuation of a purposeful and productive exchange that is setting our two countries down a pathway to greater security and long-term prosperity."