Update Required To play the media you will need to either update your browser to a recent version or update your Flash plugin.
By VOA
Feb 10, 2018


On his recent trip to Mexico, Secretary of State Rex Tillerson stressed that Mexico, Canada, and the United States can make a positive difference in the Hemisphere and around the world. He said, “When we are unified in our positions and our voice, we have significant influence on the events not just in our hemisphere, but elsewhere.”

The Secretary pointed out that North America's economic prosperity is interconnected: “I cannot emphasize enough the importance of our economic relationships. Canada and Mexico rank as the first or second-largest export market for 42 U.S. states and support nearly 3 million U.S. jobs.”

We continue to employ a coordinated and multilateral approach to diminish the influence of transnational criminal organizations and rid our hemisphere of the violence they promote.

North America is also a major player in world energy markets. As such, the United States, Canada, and Mexico discussed opportunities to promote market-based energy development and to further energy integration. 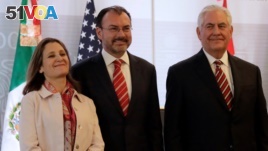 The United States, Canada, and Mexico also discussed the threat posed by transnational criminal organizations. "We continue to employ a coordinated and multilateral approach to diminish the influence of these groups and rid our hemisphere of the violence and devastation they promote," said Secretary Tillerson.

Turning to the subject of opioids, Secretary Tillerson stressed the need to "do more to attack the business models of those who traffic drugs and guns."He called for "deploying new strategies to disrupt and dismantle these deadly networks that smuggle drugs, [and] that participate in human trafficking and other illicit activities."

In June of last year, Canada participated in a conference co-hosted by the United States and Mexico to promote prosperity and security in Central America. They discussed how to follow up on commitments to improve economic, energy, security, and governance in the Northern Triangle.

Secretary Tillerson expressed grave concern over the deadly humanitarian and political crisis that has unfolded in Venezuela. He "urged the Maduro regime to return to free, open, credible, [and] democratic elections, and to allow the Venezuelans a voice in their government. Our three countries will work with all members of the Lima Group to assist the Venezuelan people during this time of crisis," he added.

The Secretary concluded that as challenges become more complex, the United States, Canada, and Mexico will continue to work together to find solutions.