Update Required To play the media you will need to either update your browser to a recent version or update your Flash plugin.
By VOA
Jun 13, 2017

U.S. Secretary of State Rex Tillerson, said, “[the situation] is troubling to the United States, the region, and to many people who are directly affected."

"As we combine efforts to defeat the military, financial, and ideological support of terrorists," said Mr. Tillerson, "we expect to see progress in the Arab world toward greater political expression."

The Gulf Cooperation Council offers member states the opportunity to engage in open dialogue. There should be "no further escalation by the parties in the region," said Secretary Tillerson. "We call on Qatar to be responsive to the concerns of its neighbors. Qatar has a history of supporting groups that have spanned the spectrum of political expression, from activism to violence. The emir of Qatar has made progress in halting financial support and expelling terrorist elements from his country, but he must do more and he must do it more quickly."

The U.S. calls on Saudi Arabia, the United Arab Emirates, Bahrain, and Egypt to ease the blockade against Qatar. There are already food shortages that can and should be addressed immediately. 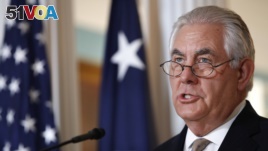 Secretary of State Rex Tillerson speaks about Qatar at the State Department in Washington, June 9, 2017.

The blockade is also impairing U.S. and other international business activities in the region and has created a hardship on the people of Qatar and the people whose livelihoods depend on commerce with Qatar.

The U.S. supports the emir of Kuwait's efforts to bring about a peaceful resolution to this agreement and progress toward eliminating all forms of support for terrorism – military, financial, moral, or ideological.

The Gulf Cooperation Council must emerge united and stronger to show the world its resolve in the fight against violence and terrorism.

"Our expectation," said Secretary Tillerson, "is that these countries will immediately take steps to de-escalate the situation and put forth a good-faith effort to resolve their grievances they have with each other."