Update Required To play the media you will need to either update your browser to a recent version or update your Flash plugin.
By VOA
Apr 9, 2017


Speaking in Brussels at a meeting of NATO Foreign Ministers on March 31, Secretary of State Rex Tillerson said that the United States is strongly committed to the North Atlantic Treaty Organization, or NATO. This transatlantic political and military alliance came into being in 1949, at the start of the Cold War, in response to aggressive tactics used by the Soviet Union against its former, Western allies in liberated Europe.

“This Alliance was forged from the ashes of World War II, and for more than half a century has been a necessary defense measure against common threats. Our bond remains essential for facing national and international security challenges in an increasingly unstable world,” said Secretary Tillerson.

So for example, NATO member states are working together to defeat ISIS, which is a threat to every country. As well, NATO's engagement in Afghanistan is critical, because peace there will ensure that Afghanistan will never again becomes a safe haven for terrorists. And once again, the Alliance is countering both violent and non-violent agitation and aggression coming out of Russia. 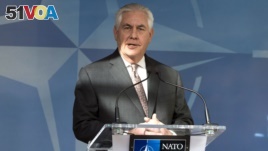 “The United States is committed to ensuring NATO has the capabilities to support our collective defense. We understand that a threat against one of us is a threat against all of us, and we will respond accordingly. We will uphold the agreements we have made to defend our allies,” said Secretary Tillerson.

But that doesn't mean that that the United States will not insist on some changes. All member states must increase their military spending to 2 percent of their gross domestic product, as had been agreed at the 2014 Wales summit. The Alliance's ability to secure the transatlantic community depends on it, said Secretary Tillerson.

“The United States will not abandon its allies or forget its friends. Many of the nations in NATO have been working together for decades to protect shared freedoms, shared values, and shared security. But we cannot keep protecting them without meeting our shared responsibility of financial and other resources,” he said.

“Long term stability, from the Baltic to the Black Sea, depends upon all allies, not just those who are the most exposed, paying their full share for defending the Alliance.”