Update Required To play the media you will need to either update your browser to a recent version or update your Flash plugin.
By VOA
Jul 29, 2017


The people of Timor-Leste went to the polls on July 22 to select 65 parliamentary representatives. It was the fourth set of general elections, including both parliamentary elections and the presidential election in March, to take place since the half-island nation gained independence from Indonesia in 2002. These were also the first elections for Timor-Leste since the departure of the United Nations peacekeeping mission in 2012.

The official tally is not expected until early August, but it appears that Fretilin, a party that started as a resistance movement and fought for independence, won 30 percent of the vote. 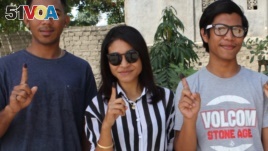 Citizens of Timor-Leste show that they have voted.

The National Congress for Timorese Reconstruction, or CNRT, which won the majority at the last election in 2012, came in second this year with an estimated 28 percent of votes cast.

Fretilin is expected to take 23 seats in parliament; CNRT will have one less. Despite its success, Fretilin will only be able to form a minority government in parliament unless it forms a coalition.

“This election should serve as a growing foundation for future elections to build upon and further consolidate the country's democracy,” said Derek Luyten, regional director for Asia at the International Republican Institute, which fielded a team of international election observers with U.S. government support.

“We applaud all political parties for their participation and look forward to working with the new government.”

“We commend Timor-Leste's national election bodies for leading an electoral process that was well-managed, credible, and accountable to the people.The United States also appreciates the robust engagement of domestic and international observers during the elections.”