Update Required To play the media you will need to either update your browser to a recent version or update your Flash plugin.
By VOA
Apr 13, 2018


We're airborne with the five most popular songs in the Billboard Hot 100 Pop Singles chart, for the week ending April 14, 2018.

If you liked last week's lineup, you'll like our new one ... we do get a bit of shuffling just for variety's sake.

Ed Sheeran drops two slots to fifth place with his four-times-platinum ex-champ "Perfect." Ed's security guard Kev has a new Instagram feed, and has racked up 185,000 followers in his first two days. He posts funny and embarrassing photos of Ed, in his words, "to keep him in line."

He also likes to mock Ed's photographer, Zakary Walters, for having more followers. If you'd like to see some samples, go to our Facebook page, VOA1TheHits. 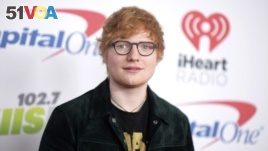 Rebounding a slot to fourth place are Post Malone and Ty Dolla $ign with "Psycho." For months, we've been anticipating Post's sophomore album "Beerbongs & Bentleys." Now, we have a release date: April 27.

Post dropped the news April 5, while also giving fans a video of his new song "Stay." Post performed the acoustic ballad on the Nashville stop of his Bud Light Dive Bar Tour.

Bruno Mars and Cardi B are back in third place with "Finesse," but that's not the big news this week. On April 7, Cardi performed on Saturday Night Live — and officially announced her pregnancy. While we don't yet know the due date, U.S. media outlets are speculating it will happen sometime this North American summer.

While Cardi has already canceled two European festival appearances, she says her other shows — including a September tour with Bruno Mars — are still on her schedule.

If Bebe Rexha and Florida Georgia Line are "Meant To Be" champions, it won't happen this week: They hold in the runner-up slot.

Beyond the charts, Bebe has announced the release date for her first full-length album. Titled "Expectations," it's available for pre-order this week, ahead of a June 22 release.

This week, Drake dropped the video for a new song, "Nice For What." The clip features several female stars from Hollywood, and you can see it on our Facebook page, VOA1TheHits.

That's it for now, but the chart never sleeps! Join us next week for a new lineup.