Update Required To play the media you will need to either update your browser to a recent version or update your Flash plugin.
By Ray McDonald
Apr 14, 2017


This is the Top Five Countdown! We're igniting the five most popular songs in the Billboard Hot 100 Pop singles chart, for the week ending April 15, 2017.

If you like new music, you'll love this week's lineup: we greet two new songs.

It all starts in fifth place, where KYLE and Lil Yachty jump a big seven slots with “iSpy.” Kyle Harvey is a 23-year-old hip-hop artist from Southern California. He began releasing mixtapes as a teenager, and released his debut album Beautiful Loser in 2013.

Two years later, Rolling Stone Magazine named him among “10 artists you need to know.” He signed a record deal with the Atlantic label in January of this year, and on May 6 he'll perform with The Chainsmokers in San Francisco.

The Chainsmokers have something new for us this week too, but first let's bring on The Weeknd and Daft Punk, rising a slot to fourth place with “I Feel It Coming.”

Number 4: The Weeknd and Daft Punk "I Feel It Coming"

If you have $6 million burning a hole in your pocket, you can buy The Weeknd's house. To be precise, it's the spectacular Los Angeles home that served as the setting in his “Starboy” video. The Beverly Hills residence has four bedrooms and five-and-a-half baths.

The Chainsmokers and Coldplay make a move this week, as “Something Just Like This” vaults four slots to third place.

The Chainsmokers just received 22 Billboard Music Award nominations. They're tied with Drake for the most-ever Billboard nominations in a single year. The big night happens on May 21 in Las Vegas. Oh, and one more thing: this is Coldplay's biggest U.S. hit since “Viva La Vida” went to number one, way back in 2008.

Last week, Bruno Mars chilled in second place with “That's What I Like,” and this week, he's still chillin'.

Bruno's a big star now, but it didn't come easily: shortly after moving from Hawaii to Los Angeles he signed a 2004 contract with Motown Records which went nowhere. He DJ'd and spent time singing in a cover band before joining the successful songwriting-production team The Smeezingtons. 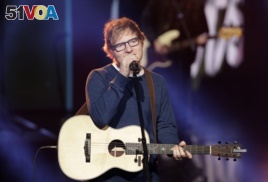 As for Ed Sheeran, a major Hollywood star turned out to be his ticket to the top. Ed spends a 10th week atop the Hot 100 with “Shape Of You.”

In 2010, Ed flew to Los Angeles with no contacts. He performed at open mic nights and one night was spotted by actor Jamie Foxx. Jamie offered Ed not only his recording studio but use of his home, and Ed was off and running here in the United States.

Where will Ed run to next week? Join us in seven days and we'll find out.