Update Required To play the media you will need to either update your browser to a recent version or update your Flash plugin.
By Ray McDonald
Apr 20, 2017


We're lining up the five most popular songs in the Billboard Hot 100 Pop Singles chart for the week ending April 22, 2017.

It's one thing when a song enters the Top Five, but quite another when it debuts in the Top Five. That's what we're looking at this week.

Let's start in fifth place, where The Chainsmokers and Coldplay back off two slots with “Something Just Like This.”

Coldplay is touring Asia and just performed in South Korea, where the band honored victims of the Sewol ferry tragedy, South Korea's worst maritime disaster. On April 16, 2014, the ferry capsized and sank, leaving more than 300 people dead or missing.

Lead singer Chris Martin called for 10 seconds of silence to honor the victims. 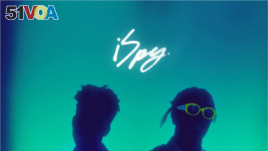 Kyle and Lil Yachty gain a notch in fourth place with “ISpy.” Lil Yachty says his debut full-length album will be titled Teenage Emotions; we still don't have a release date.

Bruno Mars descends a slot to third place with “That's What I Like.” If Mars feels like grabbing another artist for a collaboration, I have two names for him.

Barry Manilow says he loves Mars' performing style; Manilow says they met once, but nothing came of it. If Mars wants to work with a female artist, JoJo says he's her number one pick in the current music scene.

Here's your big entrant of the week: Kendrick Lamar debuts in the runner-up slot with “Humble.”

On April 16, he closed Coachella's first weekend with a headlining performance. It all happens again next weekend.

Speaking of repetition, Ed Sheeran extends his championship run to 12 weeks with “Shape Of You.” How common is this? Not very.

In the 58-year history of the Hot 100 chart, only 18 songs have held the title for 12 weeks or longer. Most recently, The Chainsmokers and Halsey lasted exactly 12 weeks at the top with “Closer.”

That happened last November...but what will happen next week? Join us in seven days and we'll listen together.