Update Required To play the media you will need to either update your browser to a recent version or update your Flash plugin.
Ray McDonald
April 22,2016


These are the five most popular songs in the Billboard Hot 100 Pop Singles Chart, for the week ending April 23, 2016.

Our songs don’t usually move quickly within the Top Five, but this week has an exception.

The fifth-place track gets here by vaulting nine slots. Desiigner is your lone newcomer this week, as “Panda” jumps a massive nine slots to fifth place.

Desiigner is Sidney Selby III, a 19-year-old rapper from Brooklyn, New York. His story started last December, when he released “Panda” on YouTube and SoundCloud. None other than Kanye West heard the song, and sampled it for his track “Pt. 2” on his Life Of Pablo album. This February, Kanye signed Desiigner to his G.O.O.D. Music label. 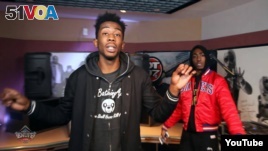 Desiigner is a a 19-year-old rapper from Brooklyn, New York.

Zayn holds in fourth place with “Pillowtalk,” one of only 25 songs to ever debut at number one here in the Hot 100. One of Zayn’s earliest mentors is Jay Sean, who had a U.S. number one hit in 2009 with “Down.” Jay tells Capital FM that he knew Zayn in school…and brought him onstage to sing well before the formation of One Direction.

It’s another steady week for Meghan Trainor, who stays put at number three with “No.” The singer says her self-image has come a long way. The 22-year-old Grammy winner is on the cover of the latest issue of Seventeen magazine, talking about her self-image. Meghan says she spent years hiding behind bulky shirts and trousers, but now loves dresses - the tighter the better.

Lukas Graham keeps it tight in second place, where “7 Years” continues to threaten the chart leader. Lead singer Lukas Graham Forchhammer says as a boy in Denmark, he took early inspiration from Snoop Dogg. A cousin gave him a tape in the 1990s, and he says the rawness of the lyrics reflected the realities of his rough neighborhood. He understood that others shared the anger and fear he sometimes felt. 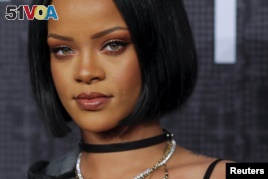 Rihanna and Drake share the Hot 100 title for an eighth big week with “Work.”

Last weekend, Rihanna made a surprise appearance at the Coachella Valley Music and Arts Festival in Southern California. She showed up at Calvin Harris’ headlining slot, and they performed their chart-topping 2011 hit “We Found Love.”

We’ve found our way to the end of another countdown, but we’ll do it all again next week. Thanks for checking us out!