Update Required To play the media you will need to either update your browser to a recent version or update your Flash plugin.
By VOA
Apr 27, 2018


We're locking down the five most popular songs in the Billboard Hot 100 Pop Singles chart, for the week ending April 28, 2018.

For the second straight week, we welcome a Hot Shot Debut ... this time at No. 1.

BlocBoy JB and Drake spend another week in fifth place with "Look Alive."

Drake just delivered on a promise to students at Miami Senior High School. Earlier this year, he donated $25,000 to the school, while also promising the school new uniforms that he designed himself. This week, Drake previewed the new designs on Instagram ... and you can see them by going on our Facebook page, VOA1TheHits. 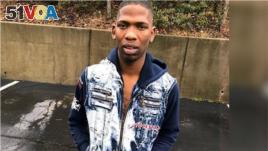 Post Malone dips a notch to No. 4 with "Psycho," featuring Ty Dolla $ign.

Ty is not the only guest appearing on Post's "Beerbongs & Bentleys" album, out April 27. The set will feature 18 songs, with other guest stars being Swae Lee, 21 Savage, Nicki Minaj, and G-Eazy and YG.

While Bebe Rexha and Florida Georgia Line slip a slot to third place with "Meant To Be," it remains the top song on the Billboard Hot Country Songs chart for a 20th week. It's only the third single to last that long at No. 1.

Sam Hunt held the title for 34 weeks with "Body Like A Back Road," while Florida Georgia Line was in the driver's seat for 24 weeks with "Cruise."

Drake ends his 11-week run at No. 1, as "God's Plan" slips to second place. It lasted a respectable 11 weeks, but now it's your runner-up.

Drake is accustomed to dominating chart records, but J Cole just stole some of his thunder. J. Cole racked up 64.5 million streams in the 24 hours after releasing his new album "KOD." This is the most 24-hour album streams on Apple Music, eclipsing Drake's previous record with "Views."

Number 1: Drake "Nice For What"

Drake shouldn't feel too bad, though, because he just replaced himself atop the Hot 100. "Nice For What" is your Hot Shot Debut in first place. Furthermore, Drake is the only artist to have both songs debut at No. 1 ...proving he's in a class by himself.

What will Drake do next? Join us in seven days and we'll see for ourselves.