Update Required To play the media you will need to either update your browser to a recent version or update your Flash plugin.
Ray McDonald
April 08,2016


These are the five most popular songs in the Billboard Hot 100 Pop Singles chart, for the week ending April 9, 2016.

Do we have any new songs for you this week? Well, no. Do we get any movement at all? Yes! Yes we do. In fact, it happens here in fifth place.

Number 5: twenty one pilots " Stressed Out" 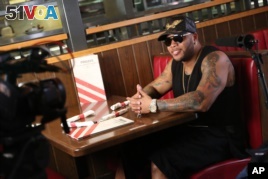 Flo Rida returns to fourth place with “My House,” after dipping to number five last week. He and Dr. Dre are facing a lawsuit by the charity fundraising City Project, which alleges both artists failed to appear for an event. Their entourages did, however, and reportedly they were pretty badly-behaved. City Project is suing the rappers for fraud.

Justin Bieber is also in a bit of hot water for an entirely different reason: it’s all about what’s on his head.

Justin slides a slot to number three with “Love Yourself.” Justin finds himself at the center of a controversy over his new hairstyle. On April 3 he appeared at the iHeart Radio Music Awards sporting dreadlocks. Social media jumped all over him, with critics accusing the singer of appropriating a traditionally black hairstyle. 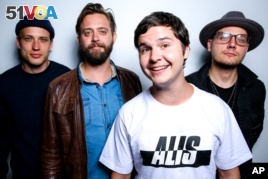 Ladies and gentlemen, Lukas Graham is on the move…the question is, where do they go from here? “7 Years” gets serious this week, moving into the runner-up slot.

The Danish band dropped its U.S. debut album on April 1. Up next: how about a tour? Lukas Graham kicks off a Stateside headlining jaunt on April 11 in Portland, Oregon. It runs through mid-May; after that, it’s on to the U.K. and Europe.

Last week, Rihanna dropped the risqué video for her latest single “Kiss It Better,” but her previous hit isn’t done yet: she and Drake hold the Hot 100 title for a sixth week with “Work.”

While Rihanna crisscrosses the U.S. on tour, Drake just dropped two new songs. “One Dance” features Wizkid and Kyla, while “Pop Style” features The Throne – also known as Kanye West and Jay Z. As for his Views From The 6 album…Drake says it’s coming later this month.

Coming next week: an all-new countdown…and all you have to do is show up!