Update Required To play the media you will need to either update your browser to a recent version or update your Flash plugin.
By Ray McDonald
Dec 14, 2016


We're in the mix with the five most popular songs in the Billboard Hot 100 Pop Singles chart, for the week ending December 17, 2016.

Christmas came early for one of our artists this week, as every one of the songs on his new album appears on the Hot 100 chart.

We'll talk about that a bit later; right now let's bring on Bruno Mars, who steps back a slot to fifth place with the title cut from his 24 K Magic album.

On December 13, Bruno appeared with James Corden on the phenomenally popular “Carpool Karaoke” segment. Other stars who've shared a ride with James include Adele, Justin Bieber, Madonna, One Direction and Britney Spears. 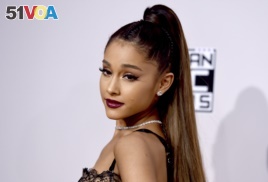 Ariana Grande arrives at the American Music Awards at the Microsoft Theater, Nov. 20, 2016, in Los Angeles.

Number 4: Ariana Grande Featuring Nicki Minaj "Side to Side"

Our next song is titled “Side To Side,” but really it's moving up and down: give it up for Ariana Grande and Nicki Minaj, recovering two slots to fourth place.

Ariana appeared on the season finale of The Voice on Dec. 13 and she wasn't alone. The one and only Stevie Wonder joined her, along with Bruno Mars, Sting, and The Weeknd. Ariana's next tour has been months in the making, but she finally hits the road on Feb. 2 in Phoenix, Arizona. European and U.K. dates are now set for May.

The Chainsmokers and Halsey dip a notch to third place with their former 12-week champ “Closer.” It's also gone four times platinum in the U.S., signifying four million units sold.

The Weeknd and Daft Punk move into the runner-up slot with the title track from the Weeknd's Starboy album. Every one of its 18 songs is currently on the Hot 100 singles chart, and incredibly, that's not a record. Back in May, Drake charted 20 songs from his Views album.

The view from number one is always nice, and that's where you'll find Rae Sremmurd for a fourth week with “Black Beatles.”

The two members of Rae Sremmurd will be home in Mississippi on Dec. 23 for “Sremm Fest,” and – proving that the Mannequin Challenge is an international phenomenon – they'll hit Poland early next year for two dates: Feb. 3 in Krakow, and Feb. 4 in Warsaw.

Wherever you are, I thank you for joining us today and please check back next week for a whole new hit list.