Update Required To play the media you will need to either update your browser to a recent version or update your Flash plugin.
Ray McDonald
December 18,2014


We’re saluting the five most popular songs in the Billboard Hot 100 pop singles chart, for the week ending December 20, 2014.

For the first time in a long time, there are more male voices than female in this week’s lineup.

It all starts in fifth place, where Mark Ronson and Bruno Mars jump three slots with “Uptown Funk.” Combining these two talents practically guaranteed a smash…It's already hit number one in Australia, Scotland, and Mark’s native United Kingdom. Mark Ronson has written and produced music for dozens of top acts, ranging from Adele to Lil’ Wayne. He’s also been a recording artist since 2003. You know Bruno Mars as a multi-platinum singer…but don’t forget he started out writing and producing hits for other acts. These two know what makes a song a smash!

Rebounding a slot to fourth place is another long-running hit machine, Maroon 5 with "Animals." On December 15, lead singer Adam proudly watched his three finalists perform on The Voice. But the winner, who was announced on December 16, was Blake Shelton's finalist, Country singer Craig Wayne Boyd. Adam has two series victories; Blake now has four. 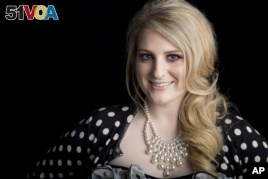 American singer, songwriter and record producer known for the pop single "All About That Bass" Meghan Trainor poses for a portrait, on Aug. 7, 2014 in New York.

Meghan Trainor loses a notch to land in third place with her former champ “All About That Bass.” On December 12, Meghan attended the Billboard Women in Music Gala in New York City. Also attending was Beyonce…who told Meghan that she likes her song and dances to it. 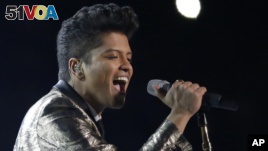 Andrew Hozier-Byrne of the band Hozier performs in concert during the Sweetlife Festival at Merriweather Post Pavilion on May 10, 2014, in Columbia, Maryland.

Jumping a slot to second place is Hozier with “Take Me To Church.” This song just collected a year-end honor. The streaming service Spotify has named it the most viral track of 2014. It’s had more than 87 million streams, while spending 48 weeks on Spotify’s Viral Chart…indicating how many times it was shared. 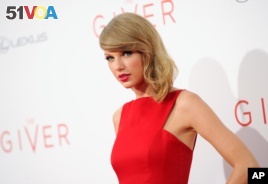 Taylor Swift attends the world premiere of "The Giver" at the Ziegfeld Theater, Aug. 11, 2014, in New York.

Taylor Swift shared photos from her 25th birthday party…and you’ll probably know a few of the guests. She is your Hot 100 champ for a fourth week with “Blank Space.” Among attendees at Taylor's birthday party were Sam Smith, Justin Timberlake, Jay Z and Beyonce…that’s a lot of platinum selling power in one place!

We deal in gold and platinum here on the hit list, so come back for more fun next week!