Update Required To play the media you will need to either update your browser to a recent version or update your Flash plugin.
Ray McDonald
February 11,2016


We're counting down the five most popular songs in the Billboard Hot 100 for the week ending February 13, 2016.

This week’s chart offers yet another new title in the number five position…We could get used to this!

Flo Rida returns to the hit list, as “My House” surges seven slots to fifth place.

This Florida native – real name Tramar Dillard – has been a regular hit-making machine over the past nine years. “My House” is his 14th Top 20 single, and his seventh to hit the Top Five. April finds him at the New Orleans Jazz and Heritage Festival, with an eight-date mini-tour of Germany falling in early June. 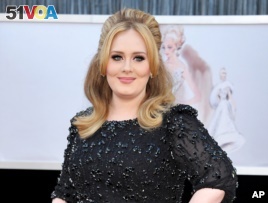 FILE - Adele arrives at the Oscars in Los Angeles.

Adele continues her downward trend, as “Hello” slips a slot to fourth place. The song spent 10 weeks at number one. It’s now past the eight-million-seller mark in the United States and…as if we needed another reminder of her popularity…she’s been officially declared the best-selling artist of 2015. That honor comes from the IFPI – the International Federation of the Phonographic Industry.

Twenty one pilots gains altitude this week, as “Stressed Out” jumps a notch to third place. The song has gone gold in Canada and Platinum in the U.S., with sales of a million copies. The Ohio act has been a duo for the past four years, using backing tapes to flesh out their sound on tour. Singer Tyler Joseph says he and drummer Josh Dun are open to adding more members, but stressed that he and Josh will always form the core of the band. 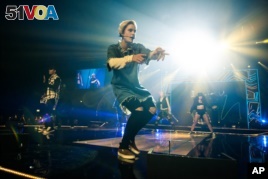 Justin’s latest hit “Love Yourself” has topped charts all over the world, and it finally hits the bulls-eye in the United States, as well. It pays to work with Justin…just ask French Montana. Last year, Justin worked with the rapper and gave him a $150,000 gold chain as a parting gift.

You can’t put a price on our hits…and we'll have more of them for you next week.