Update Required To play the media you will need to either update your browser to a recent version or update your Flash plugin.
Ray McDonald
February 26,2016


We’re counting down the five most popular songs in the Billboard Hot 100 Pop Singles chart, for the week ending February 27, 2016.

It’s another active chart, welcoming one new single and one re-entry.

If you missed Flo Rida last week, there is good news: he’s back, as “My House” recovers three slots. The rapper – real name Tramar Dillard – says he was a teenager when he created his stage name. He and his friend thought hard for about an hour before taking inspiration from his home state, Florida. He tasted his first success in 2007 with “Low,” and it’s been hit after hit ever since. 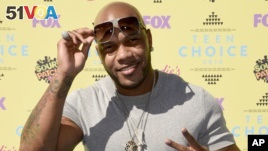 FILE - Flo Rida arrives at the Teen Choice Awards at the Galen Center in Los Angeles.

When Rihanna and Drake get together, good things happen…like hit singles. “Work” becomes their latest Top Five entry, jumping three slots to fourth place. The pair have an extensive history, both on and offstage. In 2010, they hit number one with “What’s My Name,” while “Take Care” made it to seventh place in 2012. 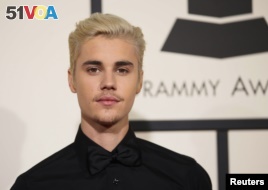 Holding at number three is Justin Bieber with “Sorry.” What do Justin and Rihanna have in common? They will each make only one festival appearance in the United Kingdom this summer…and it happens to be the same event. Rihanna and Justin will headline the V Festival, which takes place on August 20 and 21. Both artists will tour the U.K. and Europe separately.

Number 2: twenty one pilots "Stressed Out"

We keep talking about twenty one pilots’ breakout success, but this duo really has come a long way in a short time. Four years ago, this Ohio duo drove door to door, hand-delivering tickets for their shows. Today they’re the biggest breakout rock act of the past year: “Stressed Out” has gone Top Five from Australia to Israel, and their 58-date U.S. tour includes two nearly sold-out shows at New York’s Madison Square Garden.

It’s a bounce-back week for Justin Bieber, as “Love Yourself” jumps a slot to log a second total week at the top. Justin kicks off his world tour on March 9 in Seattle, Washington. He’ll headline England’s V Festival in August before launching European and U.K. dates in early September.

So that’s it for now…what will happen next week? You’ll just have to join us and find out!