Update Required To play the media you will need to either update your browser to a recent version or update your Flash plugin.
Ray McDonald
January 15,2015


We’re parading the five most popular songs in the Billboard Hot 100 pop singles chart, for the week ending January 17, 2015.

We get some real action this week. What sort of action, you ask? Well, how about one new song and a new champion?

Rebounding three slots to fourth place is Ed Sheeran, with “Thinking Out Loud.” Ed will perform next month at the Grammy ceremony. The first list of performers appeared online on January 13 - he’ll join Ariana Grande, AC/DC, Eric Church, and Madonna. The big night happens on February 8. 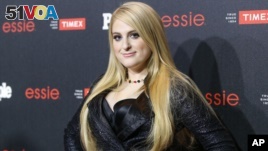 Meghan Trainor attends the PEOPLE "Ones to Watch" Party at The Line Hotel, Oct. 9, 2014, in Los Angeles.

Holding in third place is Hozier, with his Song of the Year Grammy nominee “Take Me To Church.” The Irish singer is prepping for a big event of his own. He’ll perform at the gigantic New Orleans Jazz Fest on its opening day, April 24. That’s not all: April 18 will find Hozier in Southern California at the trendy Coachella Festival.

Here’s where the real action is: Taylor Swift loses her championship, as “Blank Space” falls to second place. On January 12, Republic Records’ radio promotion team revealed the next single from Taylor’s 1989 album will be “Style.” She reportedly wrote it about her time with Harry Styles of One Direction. It impacts U.S. radio on February 10.

Mark Ronson poses for a photo at Jeff Bhasker Studio, in Venice, California.

Mark Ronson and Bruno Mars sure impact the Hot 100 this week, as “Uptown Funk” jumps a slot to number one. It also ends 19 weeks of female domination atop the Billboard Hot 100 Pop Singles chart.

What happens next week? There’s only one way to find out: join us in seven days!