Update Required To play the media you will need to either update your browser to a recent version or update your Flash plugin.
Ray McDonald
January 28,2016


We’re unveiling the five most popular songs in the Billboard Hot 100 Pop Singles Chart, for the week ending January 30, 2016.

The new year seems to have awakened the hit list, as we welcome a new title.

It happens in fifth place, where Selena Gomez jumps a slot with “Same Old Love " featuring songwriting by Charli XCX. 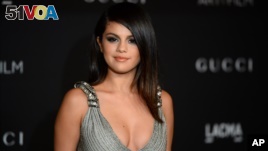 Selena and Taylor Swift were spotted last week leaving a Los Angeles gym together. Selena was getting into shape for her January 23 performance on Saturday Night Live, hosted by fighter Ronda Rousey.

Twenty one pilots battle their way to fourth place with their breakout hit “Stressed Out" – the video has been seen more than 60 million times on YouTube. Before performing on The Tonight Show, the two members received hoverboards as congratulatory gifts. It didn’t end well: singer Tyler Joseph’s mother broke her wrist riding one, and now they’re not allowed in their house. 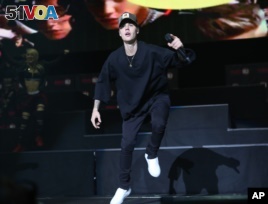 Holding in third place is Justin Bieber, who just got slammed by a U.S. TV personality. Television hostess Chelsea Handler recently remarked that Justin was the worst-ever guest on her interview show "Chelsea Lately." She told Variety magazine that Justin tried to flirt with her and made her feel like a “child molester.” The web site Hollywood Life quotes a source as saying that Justin isn’t taking the criticism seriously. 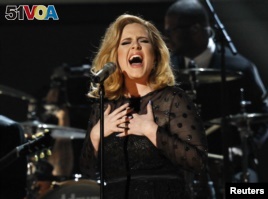 Adele continues to rack up serious numbers with her 25 album. She holds down the runner-up slot with her former 10-week singles champ “Hello.” The multi-platinum singer has a busy February in store: on the 15th she’ll be in Los Angeles performing at the Grammy Awards. Nine days later she’ll be in her native U.K. for the Brit Awards, where she leads the field with four nominations.

Justin Bieber is your Hot 100 ruler for a second straight week with “Sorry.” On February 15, he’ll give his first Grammy performance in five years. Justin has yet to win a Grammy Award, but “Where Are You Now” is up for the Best Dance Recording trophy.

That’s it for this week – join us in seven days to see if the chart has sprung any surprises!