Update Required To play the media you will need to either update your browser to a recent version or update your Flash plugin.
Ray McDonald
June 16,2016


These are the five most popular songs in the Billboard Hot 100 Pop Singles chart, for the week ending June 18, 2016.

The poet John Milton famously wrote, “They also serve who only stand and wait.” Well, there’s a lot of standing and waiting in this week’s lineup.

Number 5: The Chainsmokers & Daya "Don't Let Me Down"

We’ll start in fifth place, where The Chainsmokers and Daya hold with “Don’t Let Me Down.” How did these two acts get together in the first place?

Daya, a 17-year-old singer-songwriter from Pittsburgh, Pennsylvania, tells Teen Vogue that The Chainsmokers discovered her early in her career before her national breakout with the single “Hide Away.” She heard the demo recording for “Don’t Let Me Down,” loved it, sang it, and it’s been blowing up ever since. 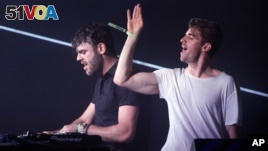 FILE - Andrew Taggart, right, and Alex Pall with the The Chainsmokers performs at the Bonnaroo Music and Arts Festival, June 10, 2016.

Also blowing up is Fifth Harmony, who this week enjoy good news on the album front.

On May 27, Fifth Harmony dropped their sophomore album 7/27, and it debuts at number four on this week’s Billboard Pop Album Chart. That’s one slot higher than their first disc "Reflection" managed in early 2015.

If you’re looking for Justin Timberlake, you’ll find him in third place with “Can’t Stop The Feeling.”

You can also see Justin on the big screen, as he makes a cameo appearance in the comedy film Popstar. Justin is good friends with one of the stars of the movie, Andy Samberg. And that’s not all: Justin also contributes to “C’mon,” the upcoming single from Little Big Town and Pharrell Williams.

Holding in second place is Desiigner, with “Panda.”

The rapper’s grandfather, Sidney Selby, played guitar with such major acts as The Drifters and the Isley Brothers. Desiigner says he himself sang in church choirs and school plays, and a gunshot wound at age 14 made him get serious about bettering himself through music. 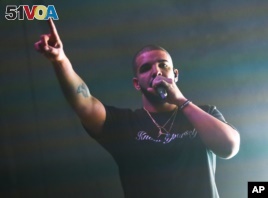 FILE - Drake performs at the FADER FORT Presented by Converse during the South by Southwest Music Festival in Austin, Texas.

Drake rules the Hot 100 for a fourth week with “One Dance,” featuring WizKid and Kyla. You may know that Drake once acted in the Canadian TV series "DeGrassi: The Next Generation," but did you know he isn’t the only star in his family? His uncles Larry Graham and Teeny Hodges are both well-known musicians, while his father Dennis Graham is a drummer who’s worked with Jerry Lee Lewis, among other artists.

That’s it for now…join us in seven days and we’ll do it all over again.