Update Required To play the media you will need to either update your browser to a recent version or update your Flash plugin.
By Ray McDonald
Jun 2, 2017


We're interfacing with the five most popular songs in the Billboard Hot 100 Pop Singles chart, for the week ending June 3, 2017.

After several weeks of big moves, the chart falls asleep: absolutely nothing changes.

Kendrick Lamar treads water in fifth place with his former chart-topper “Humble.” Kendrick kicks off his North American tour on July 12...and fans can get ready with a new batch of tour merchandise.

The TDE company has released new T-shirts, hoodies, and hats, all saying “be humble” and “sit down.” All gear is available now for pre-order and will ship by June 16.

Ed Sheeran hangs onto fourth place with another former chart-topper “Shape Of You.” Ed has denied reports he's engaged to his girlfriend Cherry Seaborn.

It's all Russell Crowe's fault: the actor mistakenly referred to Cherry as Ed's “fiancee” during a recent Facebook Live chat. Ed set us all straight Tuesday on Australian radio: they're not engaged.

They're among the stars appearing on Khaled's upcoming Grateful album, and now we have two more to anticipate. Last week, DJ Khaled went on Los Angeles radio station Power 106 to announce that Rihanna and Nas will also appear on the album. We don't, however, know the release date - Khaled just says we'll get it soon.

Bruno Mars continues to hold the runner-up slot with “That's What I Like” – every one of our top five songs has spent at least one week at number one.

Seven years ago this month, Bruno first topped the Hot 100 chart. He was the featured artist in B.o.B.'s “Nothin' On You.” Since then, Bruno has visited the top slot six more times...but B.o.B. has yet to make a return appearance. 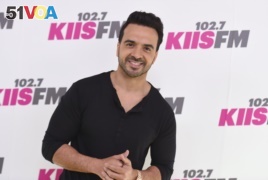 Luis Fonsi arrives at Wango Tango at StubHub Center, May 13, 2017, in Carson, California.

Sunday, June 4, Justin will participate in Ariana Grande's return concert in Manchester, England. The massive show will also feature Katy Perry, Pharrell, Miley Cyrus, Coldplay and other top acts. All proceeds will benefit the victims and families affected by the May 22 suicide bombing at the Manchester Arena, that followed a performance by Ariana.