Top 5 Songs for Week Ending May 27

Update Required To play the media you will need to either update your browser to a recent version or update your Flash plugin.
By Ray McDonald
May 26, 2017


This is the Top Five Countdown! We're sizing up the five most popular songs in the Billboard Hot 100 pop singles chart, for the week ending May 27, 2017.

On the one hand, we don't get any new songs this week...but on the other, the championship changes hands. So: is the glass half full or half empty? You be the judge.

Let's open in fifth place, where Kendrick Lamar “sits down” a slot with “Humble.” 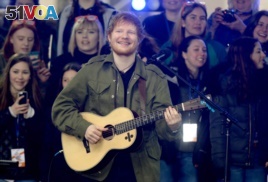 Number 4: Ed Sheeran "Shape of You"

Ed Sheeran has a bounce-back week, as “Shape Of You” rebounds a slot to number four.

British singer James Blunt – famed for his global hit “You're Beautiful” – says he taught Ed to ski in exchange for help writing songs on his latest album, The Afterlove. Ed receives songwriting credits on two tracks. Blunt says Ed told him to write the sort of open and direct lyrics fans loved on his first album.

DJ Khaled falls from first to third place with “I'm The One” featuring Justin Bieber, Quavo, Chance The Rapper and Lil Wayne.

Page Six reports that Khaled has his sights set on running Epic Records. Longtime Epic boss LA Reid was sacked two weeks ago, following claims of sexual harassment. The web site quotes an unnamed industry insider as saying that the DJ and producer has been petitioning for the job...no replacement has been named.

Bruno Mars is nothing if not consistent. Two weeks ago he topped the chart with “That's What I Like”; one week ago he fell to second place – and that's where we find him today.

Bruno performed at the Billboard Music Awards on May 21, with a little help from technology. He sang “Versace On The Floor,” streaming live from Amsterdam on his 24 K Magic World Tour.

We crown a special new Hot 100 champ this week, and to find its equal, you have to go back in time 21 years.

Luis Fonsi, Daddy Yankee and Justin Bieber reach the summit, as “Despacito” climbs two slots. It's the first Spanish-language song to top the chart since 1996, when “Macarena” reigned for 14 weeks.

Can they keep the crown next week? You know what to do: join us in seven days!