Update Required To play the media you will need to either update your browser to a recent version or update your Flash plugin.
By Ray McDonald
Oct 21, 2016


We're heating up the five most popular songs on the Billboard Hot 100 Pop Singles chart, for the week ending October 22, 2016.

Last time around, The Weeknd crashed our party in a big way with “Starboy.” This week, things quiet down...but who gets the top slot? Stay tuned.

Let's open in fifth place, where DJ Snake and Justin Bieber stay put with “Let Me Love You.”

Back in August, DJ Snake released his first full-length album Encore. It topped dance charts in both the U.K. and the United States, and features a lengthy guest list...including Bipolar Sunshine, Jeremih, Mr Hudson, Skrillex, Travis Scott, and Swizz Beatz. 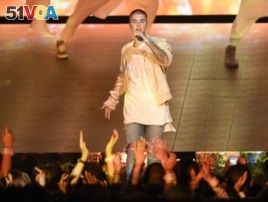 Justin Bieber performs at the Billboard Music Awards at the T-Mobile Arena.

Justin's also in fourth place this week, holding steady along with Major Lazer and MO in “Cold Water.” Mr. Bieber has a new home in London!

Justin is touring the U.K. and Europe through November, and is renting a 15-bedroom mansion in North London. The home includes a massive indoor swimming pool and an Italian marble bathroom...all for a cool 108,000 pounds a month in rent. That works out to about $132,000 (US). Twenty One Pilots loses altitude this week, as “Heathens” drops a slot to third place. This has been an incredible year for them.

Before this February, this Ohio duo had never climbed beyond 80th place in the Hot 100. Since then they've enjoyed three Top Five hits...while becoming the first alternative rock group to put two songs in the Top 10 simultaneously. Taking over second place are The Weeknd and Daft Punk with “Starboy.” You'll find the title track on his Starboy album, out November 25.

Daft Punk is rumored to be a headliner in next year's Glastonbury Festival in England - but that won't take place until next June, so it's all speculation at this point. 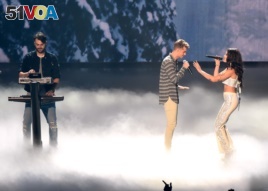 Alex Pall, left, and Andrew Taggart of The Chainsmokers, perform with Halsey at the MTV Video Music Awards at Madison Square Garden on Aug. 28, 2016, in New York.

There's no guesswork at number one, though: The Chainsmokers and Halsey hold the top slot for an eighth big week with “Closer.”

Group member Drew Taggart tells Harper's Bazaar that the song was born on tour last autumn. Drew says he and his partner Alex Pall were listening to a lot of old emo rock by Blink-182 and Taking Back Sunday, and wanted to write in a confessional vein. They befriended Halsey, who wrote the second verse and turned the song into a conversation...and a hit.