Update Required To play the media you will need to either update your browser to a recent version or update your Flash plugin.
Ray McDonald
October 30,2015


Here are the five most popular songs in the Billboard Hot 100 Pop Singles chart, for the week ending October 31, 2015.

October 31 is Halloween in the United States, and we promise you all treats…no tricks. We even have a new track for you.

Shawn Mendes rises three slots to fifth place with “Stitches.” Born in Toronto, Canada, Shawn began posting song snippets on Vine in 2013 - bear in mind that Vine videos are only six seconds long - And he still collected millions of followers in a matter of months.

Back in April, Shawn’s debut album Handwritten opened at number one on the Billboard chart. He’s been touring North America with Taylor Swift and has plenty of momentum going right now. 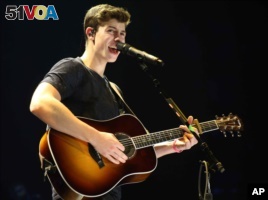 Shawn Mendes performs as the opener for Taylor Swift during The 1989 World Tour at the Georgia Dome on Oct. 24, 2015, in Atlanta.

Fetty Wap and Remy Boyz take it a slot higher to fourth place with “679.” Fetty returned to the stage on October 22 after breaking his leg last month in a motorcycle accident. He performed atop a golden throne…much like Foo Fighters leader Dave Grohl, who broke “his” leg in June, after falling offstage in Sweden.

Number 3: Justin Bieber "What Do You Mean?"

Justin Bieber holds at number three with “What Do You Mean?” The badboy pop star took home five MTV Europe Music Awards on October 25, including Best Male and Best Worldwide Act: North America. Now, all eyes turn to November 13, the release date for his next album, Purpose.

Drake holds in second place on the Hot 100 with “Hotline Bling” – he has yet to hit number one as a lead artist. Last week, Drake released the brightly-colored video, which showed him dancing in a variety of outfits…it turns out Drake dances like the rest of us, which led to many creative Internet memes.

Number 1: The Weeknd "The Hills

This week’s top artist has only one request: please don’t pet his hair.

The Weeknd logs a fifth week atop the Hot 100 with “The Hills.” Speaking with Rolling Stone Magazine, the Canadian singer recalls chatting with Taylor Swift last February at a Grammy after-party. He says she kept praising his music…while petting his hair. (He did say that everyone was a bit drunk at the time.)

We'll be rolling your way next week with a brand new lineup, so join us if you can.