Update Required To play the media you will need to either update your browser to a recent version or update your Flash plugin.
Ray McDonald
Sep 2, 2016


We're counting down the five most popular songs in the Billboard Hot 100 Pop Singles chart, for the week ending September 3, 2016.

Most U.S. schools are back in session this week, so we'll begin with a math problem: what's three take away two? If you said one, you're not chart-savvy: on the Hot 100, it means a third-place song falls to fifth place, and that's exactly where we find Calvin Harris and Rihanna.

Number 5: Calvin Harris Featuring Rihanna " This Is What You Came For"

The duo slips two slots with “This Is What You Came For.” On August 28, Calvin took Best Male Video honors for this song at the MTV Video Music Awards. He also nabbed Best Electronic Video for “How Deep Is Your Love.” Rihanna had an even higher profile, performing four times and receiving the Video Vanguard Award. 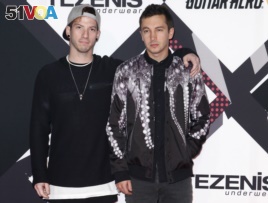 Twenty One Pilots spend another week in fourth place with “Heathens.” This song helped them win an MTV Award for Best Rock Video; the pair beat entries from All Time Low; Coldplay; Fall Out Boy and Demi Lovato; and Panic! At The Disco. 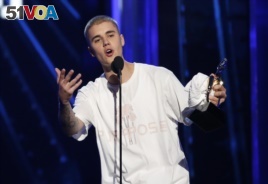 Major Lazer and Justin Bieber lose a slot this week, as “Cold Water” cools off to third place. Justin failed to collect on his three VMA nominations on Sunday – no matter, really, because he didn't show up. He was in Cabo San Lucas, Mexico with his new girlfriend Sofia Richie, then returned to Los Angeles to sing karaoke. He did “Great Balls of Fire” by Jerry Lee Lewis. FILE - Sia performs at Wango Tango 2015 at StubHub Center.
Here's some hot news: Sia is no longer your Hot 100 champ. She and Sean Paul slip to second place with “Cheap Thrills.” Sean Paul says Sia approached him to collaborate. Not only did he like the song, he says his mother is a fan of Sia's, so the collaboration was a no-brainer. Gotta keep mom happy!

Alex Pall, left, and Andrew Taggart of The Chainsmokers, perform with Halsey at the MTV Video Music Awards at Madison Square Garden on Aug. 28, 2016, in New York.

Here's your final math problem of the day: what's six plus five? If you answered “one,” you're catching on: The Chainsmokers and Halsey jump five slots from sixth place to take the Hot 100 title. It's the first countdown victory for both acts. Halsey's real name is Ashley Frangipane...she took her stage name from Halsey Street in Brooklyn, New York, where she spent time as a teenager.

School's out for the day, but we'll get together again next week for an all-new hit list.