Update Required To play the media you will need to either update your browser to a recent version or update your Flash plugin.
David Byrd
July 31,2015


Singer-songwriter Tori Kelly is on the verge of a huge breakthrough. Her recent performances on the Billboard and BET Awards shows have created a buzz in pop music.

You couldn’t call Kelly an overnight success. Sure she’s only 22, and she is managed by Scooter Braun – the same man who ignited the careers of pop superstars Ariana Grande and Justin Bieber. But Kelly has been working towards pop stardom – and honing her songwriting and singing chops – for more than a decade now.

The Southern California girl first appeared in public on the talent show "Star Search" when she was only 10. But her real exposure came from posting videos on YouTube. She gained recognition for her cover with another YouTuber Angie Girl of Frank Ocean’s “Thinkin’ Bout You.”

Eventually Kelly made her way to "American Idol," and advanced through to the Hollywood round. But she did not make the Top 24. That loss inspired her to write more of her own material, which eventually became part of her first EP “Handmade Songs by Tori Kelly.” On that, she played many of the instruments and produced the tracks.

“Even just releasing music in general is an accomplishment. And the fact that I get to put out a whole album of songs that I just put my whole heart into, and people are responding really well to it," she said. "It’s like the best feeling in the world. Because these are songs about my life so it’s kind of like I’m just throwing myself out there and people are in to it. So it’s really cool to be able to do what I love.”

"Handmade Songs" sold well enough to reach the top 10 on a number of music charts. She followed that success with live performances at clubs in Los Angeles, and by opening for larger acts like Jewel and Ed Sheeran.

Recently, Kelly electrified audiences at the Billboard Music Awards with her performance of an acoustic version of her song “Nobody Love.” And then at the BET Awards, a version of Smokey Robinson’s “Who’s Lovin’ You” that had R&B crooner John Legend tweeting that Kelly’s was the “vocal performance of the night.”

The singer-songwriter says that being within reach of her goal is amazing, and something she dreamed of her whole life. 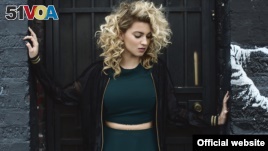 “I think all the awards shows I have done so far have just been so surreal," she said. "Like, I always dreamed of being on different awards shows, sitting at home on my couch and watching. I think as a kid I just always put myself on that stage, and the fact that it’s actually happening, that I get to be a part of these shows is incredible.”

Kelly released her first full-length album, “Unbreakable Smile” in June. Max Martin – who produces Kelly Clarkson, Pink, and Ellie Goulding – helped produce the CD, which debuted on the Billboard 200 at No. 2.

Her single “Should’ve Been Us” is also rising on the Billboard Hot 100.