Toward Economic Recovery in Iraq

Update Required To play the media you will need to either update your browser to a recent version or update your Flash plugin.
By VOA
Feb 21, 2018


It will take years for Iraq to recover from the devastation caused by ISIS. The country has made tremendous strides forward, said U.S. Secretary of State Rex Tillerson at the recent Kuwait Reconstruction Conference on Iraq.

The Government of Iraq rolled out its 10-year Reconstruction and Development Framework, which compliments its 10-year Vision 2030 and National Development Plan. It combines government reforms, anti-corruption programs, incentives for private sector investment, and international contributions, to effectively rebuild the Iraqi economy and identify sustainable long-term solutions to foster economic stability. 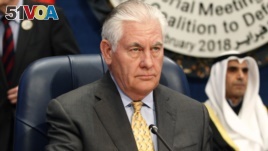 U.S. Secretary of State Rex Tillerson at a meeting of a U.S.-led coalition fighting against the Islamic State group in Kuwait. (Feb. 13, 2018.)

“The Government of Iraq is taking steps to match actions with words to demonstrate that Iraq is open for business, creating meaningful improvements to Iraq's business environment and attracting much-needed investment for reconstruction projects across Iraq. The United States will maintain our bilateral relations with Iraq through the Strategic Framework Agreement,” Secretary Tillerson said.

To enable the defeat and stability in the wake of ISIS, the United States has contributed more than 2.2 billion dollars for Iraq in economic and security assistance since 2014. The U.S. is currently finalizing the details on a second FMF loan to build on the historic gains these forces have made over the past three years. This week, the Department of Defense announced an additional nearly $1 billion to further support, train, and equip Iraqi forces over the coming year.

“A healthy private sector is essential to creating the jobs and stability that are needed, and it will generate revenues necessary for reconstruction and needed investments in the health, security, and transportation sectors. Steps towards a stronger private sector will require tough decisions and perseverance, but they will pay off in the future,” said Secretary of State Tillerson.

“Much work remains to rebuild Iraq and modernize its economy,” said Secretary of State Tillerson.“Helping Iraq create a government that is inclusive, accountable and transparent will build a society that can counter the extremist ideologies. This will deal ISIS its final blow and demonstrate its failed, violent ideology.”