Toward Reunification of Gaza and West Bank

Update Required To play the media you will need to either update your browser to a recent version or update your Flash plugin.
By VOA
Oct 5, 2017


In late September, the government of Gaza, Hamas, announced its agreement to dissolve its governing body and allow the Palestinian Authority to assume its full responsibilities there. Hamas has also agreed to talks with the rival Fatah movement and agreed in principle to hold general elections in Gaza and the West Bank

Gaza is a self-governing Palestinian territory that was captured from Egypt by Israel during the 1967 Arab-Israeli War. In the mid-1990s, under the Oslo accords, Israel transferred security and civilian responsibility for numerous Palestinian-populated areas of Gaza and the West Bank to the newly-created Palestinian Authority, but kept control of Gaza's land and maritime borders and airspace.

Since 2006, Gaza has been controlled by Hamas, which ousted the more moderate Fatah party. Hamas' stated goal since its inception has been to carry out an armed struggle against Israel. It has been a U.S. designated Foreign Terrorist Organization, and is also designated by Israel .Therefore, since 2006, Israel and Egypt have enforced tight restrictions on movement and access of goods and individuals into and out of Gaza. 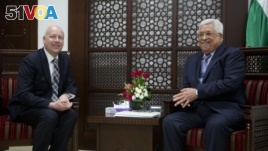 The takeover of Gaza by Hamas has left the Palestinians torn between two governments, with President Mahmoud Abbas' Palestinian Authority governing autonomous areas of the West Bank.

"We will be watching these developments closely, while pressing forward with the Palestinian Authority, Israel, and international donors to try to improve the humanitarian situation in Gaza. The United States stresses that any Palestinian government must unambiguously and explicitly commit to nonviolence, recognition of the State of Israel, acceptance of previous agreements and obligations between the parties, and peaceful negotiations.”