Update Required To play the media you will need to either update your browser to a recent version or update your Flash plugin.
By VOA
Jul 4, 2018


Trafficking in persons, or modern slavery, is a crime that involves the exploitation of a human being for the purposes of compelled labor or a commercial sex act through the use of force, fraud, or coercion, or the use of a child in the commercial sex industry. It also includes the unlawful recruitment and use of child soldiers. It is a heinous crime and it is global in nature. No country is immune. Today, some 25 million people around the world are victims of human trafficking.

Every year, the United States Department of State issues its annual Trafficking in Persons, or TIP, Report, which evaluates the anti-trafficking efforts of 187 countries and territories, including the United States. The TIP Report places countries on one of four tiers, depending on each government's efforts to prosecute traffickers, protect victims, and prevent the crime. 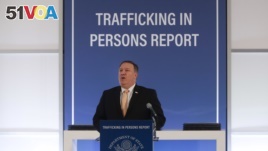 Secretary of State Mike Pompeo announces the 2018 Trafficking in Persons Report at the US State Department in Washington, Thursday, June 28, 2018.

In the 2018 report, 29 countries were upgraded while 20 earned downgrades.

And there were also positive developments across entire regions, said Secretary of State Mike Pompeo at the Report's launch ceremony on June 28th:

“Of the 48 African countries included in the report, 14 received upgrades – meaning we observed a strong trend of increased efforts to improve their overall response. Despite significant security threats, migration challenges, other financial constraints, and other obstacles, the region improved significantly.”

“Human trafficking deprives millions worldwide of their dignity and freedom. It undermines national security, distorts markets, and enriches transnational criminals and terrorists, and is an affront to the universal values we as Americans hold dear,” said Secretary of State Pompeo.

“The United States remains a committed leader in combating this global threat. President Trump has made ending human trafficking a top priority for the Administration and dedicated the government's full resources to fighting this crime.”