Update Required To play the media you will need to either update your browser to a recent version or update your Flash plugin.
By VOA
Jul 5, 2017

The implementation of the suspension of entry began on June 29th, three days after the United States Supreme Court ruled that the portion of the order which generally prohibits nationals from Iran, Libya, Somalia,Sudan, Syria, and Yemen from entering the U.S. for three months because of national security worries can take effect for certain categories of those nationals. It also allows a 120-day pause on the entry of refugees into the United States. 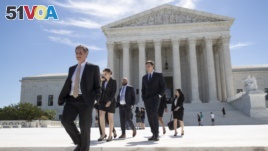 Over the past three months, implementation of these portions of the order, which is a revised version of an executive order President Trump signed in January, had been frozen by a series of rulings by lower courts.

While unanimously overturning the earlier injunctions, the Supreme Court ruling was narrow in scope: the government cannot apply the suspension “to foreign nationals who have a credible claim of a bona fide relationship with a person or entity in the United States.” The Court explained that for individuals, a credible claim to a “close familial relationship” is required.

What constitutes a “close familial relationship” has been clarified by the State Department in consultation with other agencies to include only parents, spouses, fiancés, children, adult sons or daughters, sons and daughter-in-laws, and siblings.

On the entity side, a credible claim to a bona fide relationship must be formal, documented, and formed in the ordinary course, rather than to evade the order. This would include a student who has been officially admitted to an American university; or a worker who has accepted an offer of employment from an American company. Such individuals are exempt from the travel suspension, but are still subject to standard visa eligibility requirements.

The Supreme Court agreed to hear oral arguments about the fundamental issues presented by the case – including whether the order was consistent with the President's authority to issue such executive orders on the grounds of protecting the nation – when the Court convenes in October.

President Trump called the Supreme Court's decision “a clear victory for our national security...As President, I cannot allow people into our country who want to do us harm. I want people who can love the United States and all of its citizens, and who will be hardworking and productive. My number one priority as Commander in Chief is to keep the American people safe.”