Trouble in the DRC

Update Required To play the media you will need to either update your browser to a recent version or update your Flash plugin.
By VOA
Jan 30, 2018


President Joseph Kabila of the Democratic Republic of the Congo, or DRC, has served the two terms permitted under the country's Constitution. It is someone else's turn to seek office.

A crisis ensued when Kabila failed to organize timely elections and step down. Following negotiations, Kabila's ruling party and the opposition coalition signed the St. Sylvestre accord.President Kabila agreed not to seek a third term or change the constitution. He would remain in office until the installation of his successor following elections which would be held by the end of December 2017.But there were no elections in the DRC last year, nor will any be held until December 2018 at the earliest. And now, President Kabila's party is talking about changing the Constitution to allow him to run for another term. 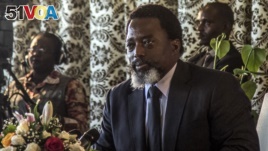 President of the Democratic Republic of Congo, Joseph Kabila, holds a press conference for the first time in five years on January 26, 2018.

The President's refusal to step down and the political machinations that have delayed elections over and over again, have caused a political crisis, heightened insecurity, and triggered a series of street protests in which scores of people have been killed.

On December 31, the Catholic Lay Coordinating Committee organized peaceful demonstrations where security forces used excessive force against unarmed participants. Another peaceful protest was scheduled for Sunday, January 21st. Authorities prepared for the demonstration by pre-emptively shutting down internet and SMS services and forbade gatherings of more than five people. When the peaceful protest nonetheless took place, they shot teargas and live ammunition into the crowd, killing at least 7 people, injuring nearly another hundred and arresting dozens.

“We condemn in the strongest terms the violence perpetrated by DRC security forces on January 21 against church-led peaceful protests,” said State Department Spokesperson Heather Nauret in a written statement.

“We are appalled that the DRC government, including President Kabila, would employ repressive tactics and disproportionate use of lethal force against civilians -- including religious leaders and children -- exercising their democratic rights to call for credible and inclusive elections,” she said.

“The use of lethal force against Congolese citizens, and the cutting of internet and SMS service, undermine the democratic process, obstruct implementation of the St. Sylvestre Accord and contravene international human rights norms.

“We call on President Kabila to hold accountable security force members who fired on civilians or ordered the use of lethal force and urge him and his government to ensure a peaceful and open electoral process so that credible elections are held as scheduled in December 2018.”