Update Required To play the media you will need to either update your browser to a recent version or update your Flash plugin.
By VOA
May 25, 2017


On May 22, a suicide bomber walked into a group of exiting concert goers in Manchester, England and blew himself up, killing 22 and injuring 64. Many victims were under the age of 16.

The perpetrator was identified as Salman Abedi, the son of Libyan refugees. Police have detained numerous men in connection with the attack, including Abedi's 23-year-old brother in Tripoli. The Greater Manchester Police are reporting that a woman was also arrested. 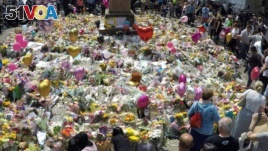 Crowds look at the balloons, flowers and messages of condolence left for the victims of the Manchester Arena attack, in central Manchester, Britain May 25, 2017.

British Prime Minister Teresa May raised the United Kingdom's terror threat up to its highest level of "critical", meaning more attacks may be imminent.

President Donald Trump expressed, on behalf of the people of the United States, his deepest condolences to those so terribly injured in this terrorist attack and to the families of the victims.

“We stand in absolute solidarity with the people of the United Kingdom,” he said:

“So many young, beautiful, innocent people living and enjoying their lives murdered by evil losers in life. I won't call them monsters because they would like that term. They would think that's a great name. I will call them from now on losers because that's what's they are. They're losers.”

This kind of terrorism that snuffs out the lives of innocent people in the most barbaric manner is what President Trump has been rallying countries to fight against. “Our society,” he said, “can have no tolerance for this continuation of bloodshed, we cannot stand a moment longer for the slaughter of innocent people.” And in this attack, it was mostly children.

“The terrorists and extremists, and those who give them aid and comfort, must be driven out from our society forever,” said President Trump. “This wicked ideology must be obliterated -- and I mean completely obliterated -- and innocent life must be protected.”

“All civilized nations,” said President Trump, “must join together to protect human life and the sacred right of our citizens to live in safety and in peace.”