Update Required To play the media you will need to either update your browser to a recent version or update your Flash plugin.
By VOA
Feb 6, 2018


President Donald Trump recently hosted a group of North Koreans who risked all to flee the brutal North Korean regime.

Facing imprisonment for himself and his family, university professor Dr. Hyun, fled North Korea in 2004. Dr. Hyun said he had never experienced the outside world, and was "very nervous because [the] North Korea[n] regime and North Korea was all I knew." When Dr. Hyun got to South Korea, he said, "I could say, freely, whatever I thought, which" one could not do in North Korea. "So I'm really living a new life that I had not imagined before."

Jung Gwang-il was sent to the infamous Yodok prison camp for three years for alleged espionage. He fled to South Korea and now heads up an organization called No Chain, which tries to stop the abuse of political prisoners in North Korea and works to get information into North Korea. He personally translated President Trump's State of the Union address and sent it into North Korea for the people to see. 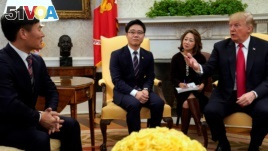 Kim Young-soon was also sent to Yodok prison camp - a place where rape, murder, torture, and even cannibalism are not uncommon, all because she learned the secrets of the ruling family. The notoriously brutal camp claimed the lives of most of her family and left her young son severely disabled. She fled North Korea in 2001.

Author and defector Hyeonseo Lee, says escaping from North Korea is more like "leaving another universe," than another country. "After I escaped to China," she added, "I escaped an arranged marriage when I was 19, and I also escaped a brothel. And eventually, I was arrested by the Chinese police, but narrowly avoided being repatriated back to North Korea because of my Chinese language abilities."

"These [defectors] are just great people that have suffered incredibly," said President Trump. That's why the United States will continue to expose the brutal regime of Kim Jong-un for the barbaric way it treats its people.