Update Required To play the media you will need to either update your browser to a recent version or update your Flash plugin.
By VOA
Aug 11, 2018


The United States is committed to a strategy of a free and open Indo- Pacific region, and the Association of Southeast Asian Nations, or ASEAN, is central to that strategy.

ASEAN is an economically dynamic region at the heart of the Indo-Pacific and a key partner in addressing regional and global challenges. ASEAN-centered meetings provide an important platform for addressing pressing political and security issues. 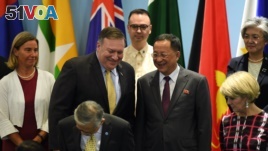 US Secretary of State Mike Pompeo at 51st ASEAN Ministerial Meeting in Singapore on August 4, 2018.

Speaking at a press conference after the 51st ASEAN Foreign Ministers' Meeting, Secretary of State Mike Pompeo reaffirmed the Trump Administration's commitment to this vital part of the world. Security in the region has been a major issue discussed at the meetings, he said. And much of this conversation revolves around the Democratic People's Republic of Korea, or North Korea, and its efforts to build weapons of mass destruction.

“I've emphasized the importance of maintaining diplomatic and economic pressure on North Korea to achieve the final, fully verified denuclearization of the DPRK, as agreed to by Chairman Kim,” said Secretary of State Pompeo. “It's worth remembering this isn't just an American security goal; it is clear our partners and allies within ASEAN know how important the denuclearization of North Korea is for their own security. I called on them to strictly enforce all sanctions.”

In reference to reports that Russia is allowing for joint ventures with North Korean firms and granting new work permits to North Korean guest workers, Secretary of State Pompeo noted that any such activity would be in violation of UN Security Council Resolution 2375:

“This is a serious issue and something that we will discuss with Moscow. We expect the Russians and all countries to abide by the UN Security Council resolutions and enforce sanctions on North Korea. Any violation that detracts from the world's goal of finally fully denuclearizing North Korea would be something that America would take very seriously.”

In an effort to strengthen maritime security in the Indo-Pacific, develop humanitarian assistance and peacekeeping capabilities, and enhance programs that counter transnational threats, the United States will dedicate nearly 300 million dollars in new funding to reinforce security cooperation throughout the entire region, said Secretary of State Pompeo.

“Progress on these and other critical security issues is essential to a free and open Indo-Pacific. ASEAN will remain at the center of this effort. A free Indo-Pacific is one in which every citizen can exercise his or her fundamental rights without any constraint.”