Update Required To play the media you will need to either update your browser to a recent version or update your Flash plugin.
By VOA
Jul 11, 2018


The United States has imposed sanctions on three Nicaraguan individuals with connections to the government who are involved in serious human rights abuses and corruption. The actions were taken in connection with the ongoing crisis in Nicaragua, including the horrific violence perpetrated by security forces against demonstrators.

Protests against the government of President Daniel Ortega have been taking place since April 18. According to the U.S. Treasury Department, the violent response by the government has resulted in the death of at least 220 demonstrators, and injuries to nearly 1500. It also included “beating of journalists, attacks against local TV and radio stations, and assaults on mothers mourning the deaths of their children.”

The three designated individuals are Nicaraguan National Police Commissioner Francisco Javier Diaz Madriz; Fidel Antonio Moreno Briones, who serves as the main link between municipal governments and the Sandinista National Liberation Front, known as the FSLN; and Jose Francisco Lopez Centeno, president of the state-owned oil company Petronic and vice-president of ALBANISA, a private company that imports Venezuelan petroleum products. He also serves as Treasurer of the Ruling FSLN party. 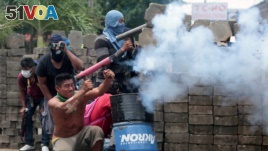 A demonstrator fires a homemade weapon against police during a protest against the government of Nicaraguan President Daniel Ortega in Masaya, Nicaragua June 19, 2018.

U.S. Under Secretary of Treasury for Terrorism and Financial Intelligence Sigal Mandelker said in a statement that “President Ortega and his inner circle continue to violate basic freedoms of innocent civilians while ignoring the Nicaraguan people's calls for the democratic reforms they demand, including free, fair, and transparent elections.”

The U.S. sanctions, she declared “are part of the U.S.'s ongoing campaign under the Global Magnitsky program to hold individuals who engage in human rights abuses and corruption to account.” The sanctions mean that any property or assets these individuals hold in the United States are blocked, and U.S. persons are prohibited from engaging in transactions with them.

In a separate statement, State Department Spokesperson Heather Nauert said that the sanctions show “the United States will expose and hold accountable those responsible for the Nicaraguan government's ongoing violence and intimidation campaign against its people. These actions must end.”

Ms. Nauert said the United States “support[s] the Episcopal Conference of Nicaragua's efforts to advance negotiations to resolve the crisis, and urge[s] full implementation of the June 15 National Dialogue agreement on human rights as a critical component. The United States,” she added, “also supports calls for early, free, fair and transparent elections. We will continue to monitor the situation closely and take additional actions as events warrant.”