Update Required To play the media you will need to either update your browser to a recent version or update your Flash plugin.
By VOA
Sep 3, 2018


In an effort to encourage the Democratic People's Republic of Korea, or North Korea, to dismantle its nuclear weapons program, the United Nations Security Council last year passed Resolution 2375, which imposes sanctions on North Korea.

The United States is determined to strictly implement this Resolution. 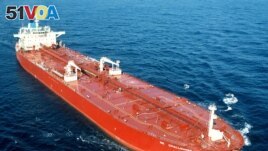 “Members of the UN Security Council, and by extension all UN member-states, have unanimously agreed to fully enforce sanctions on North Korea, and we expect them to continue to honor those commitments,” said Secretary of State Mike Pompeo:

“When sanctions are not enforced, the prospects for the successful denuclearization are diminished. Right now, North Korea is illegally smuggling petroleum products into the country at a level that far exceeds the quotas established by the United Nations. These illegal ship-to-ship transfers are the most prominent means by which this is happening.”

On August 21, the U.S. Department of the Treasury issued sanctions against two Russian shipping companies for the transfer of refined petroleum products to North Korean vessels and six vessels associated with those firms. The sanctions are pursuant to Executive Order 13810 of September 21, 2017, which targets persons involved in the ship-to-ship transfer of refined petroleum products with North Korea-flagged vessels, an activity expressly prohibited by the UN Security Council.

The two companies are Primorye Maritime Logistics Co Ltd and Gudzon Shipping Co LLC. Both are based in the Russian port of Vladivostok. Among the six Russian-flagged sanctioned vessels is the Patriot, which conducted two ship-to-ship transfers of oil in early 2018: 1,500 tons to the North Korea-flagged vessel Chong Rim 2 and another 2,000 tons to the North Korea-flagged ship Chon Ma San. The buyer was the Taesong Bank, a North Korean entity that has previously been sanctioned by both the U.S. and the UN.

“Ship-to-ship transfers with North Korea-flagged vessels from Russia or elsewhere of any goods being supplied, sold, or transferred to or from [North Korea] are prohibited under the U.N. Security Council resolutions on North Korea and are sanctionable under U.S. law,”said Secretary of the Treasury Secretary Steven Mnuchin in a written statement.

“Consequences for violating these sanctions will remain in place until we have achieved the final, fully verified denuclearization of North Korea.”