Update Required To play the media you will need to either update your browser to a recent version or update your Flash plugin.
By VOA
Jul 11, 2018


At the recent World Gas Conference in Washington, the U.S. reinforced the fundamental importance of countries and regions employing a diverse combination of fuels, source countries, and delivery routes to enhance their energy security.

At the conference, U.S. officials underscored the strong U.S. opposition to Russian-led pipelines like Nord Stream 2 and the second line of TurkStream that would exacerbate Europe's dependence on Russian-sourced energy. 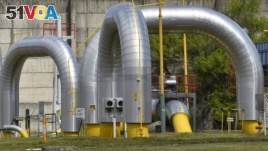 Pipelines are seen at a gas border delivery station of pipeline operator Eustream in the eastern Slovak. (File)

By contrast, said State Department spokesperson Heather Nauert, “the United States commends the historic progress being made on the Southern Gas Corridor in Azerbaijan and Turkey, which could bring Caspian gas from Azerbaijan to countries across Europe by 2020.”

In addition to these developments, the United States reaffirms its support for energy projects that enhance energy diversification and energy security for its allies and partners worldwide.

Ms. Nauert expressed support for the potential of the floating storage and regasification unit at Krk Island in Croatia and urged all stakeholders to work together to make it a success. Such a structure would help insure the diversity and security of the gas supply.

In addition, Black Sea gas from Romania, noted Ms. Nauert, “represents a promising yet untapped source of energy that would strengthen energy markets and energy security throughout the region. We are closely watching developments as Romania's parliament and government work out the legislation that will establish the stable fiscal and regulatory framework required for energy companies to invest in the development of this resource.”

“Diverse sources and delivery routes,” stressed Ms. Nauert, “ensure that energy is available at the best price to all and that no supplier can use energy to economically or politically coerce consumers.”