Update Required To play the media you will need to either update your browser to a recent version or update your Flash plugin.
Jill Craig
February 17,2016


KAMPALA— As Ugandans get ready for Thursday's presidential and parliamentary elections, people of faith have been praying for both the elections and their leaders. Some voters let their religious beliefs guide them in deciding and choosing their candidate.

Singing, praying, and preaching…as the campaign season wraps up in Kampala, many Ugandans fulfilled spiritual obligations on the last Sunday before the elections, when they will vote for their president and parliamentarians.

“Ugandans are very religious and when I talk about being religious, for example, today you find churches are full in the Christian faith,” explained Rev. Diana Nkesiga, Vicar, All Saints’ Cathedral. “In cults…the mosques are full.”

Influenced by religion or not

But even though many are religious, Ugandans have different opinions on how their faith will impact their choices in the voting booth.

Alex Butugi, a social worker, said he will vote for the candidate who best represents their religious beliefs.

“I think it’s my duty now, me as a Christian, to actually vote [for] the person who I think is godly and who is going to value our Christian values,” he added.

Others, like Michael Manzi, an IT company executive, care more about the candidate’s stance on issues rather than religious zeal. 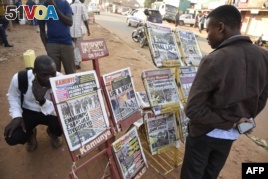 People gather around a newspaper stand to read the local daily papers on Feb. 17, 2016 ahead of tomorrow's presidential elections.

“Of course it’s helpful to know that someone that is godly will probably live out his promises, but it’s very difficult to know that because we don’t have a chance to know the people intimately,” he said. “To know them personally, so we look at who has a better manifesto, you know. Who’s going to address the issues that you know, touch me the most?”

Speaking from the Old Kampala National Mosque, Haji Nsereko Mutumba said that if Muslims are electing Muslim leaders, they care about religion. If they are electing politicians, they want to know how they plan to help the people.

“For us, we elect presidents and members of parliament, to cater for our social welfare,” he said. “We don’t mind about their religion."

Ugandans go to the polls Thursday.