Update Required To play the media you will need to either update your browser to a recent version or update your Flash plugin.
By VOA
Jun 25, 2018


Despite the significant progress Ukraine has made on reforms since the 2014 Revolution of Dignity, corruption remains a fact of everyday life in Ukraine. As Deputy Secretary of State John Sullivan said in Kyiv earlier this year, corruption eats away at the fabric of Ukrainian society in many ways. It deters foreign investment and discourages economic initiative, and it crushes the hopes of those who play by the rules.

The United States remains committed to the success of a stable, prosperous, democratic, and free Ukraine, and has encouraged Ukraine to adopt transformational reforms to increase prosperity, security, and the rule of law. 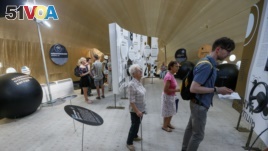 Visitors read information about corruption inside a giant tent, at the "Corruption Park" in Kyiv, Ukraine, June 14, 2018.

On June 7th, the Ukrainian parliament took a decisive step toward rolling back systemic corruption by adopting a law to create an independent anti-corruption court.

As State Department Spokesperson Heather Nauert noted in a written statement, “The United States commends Ukraine for adopting a law to establish an independent anti-corruption court.”

“We were pleased,” she continued, “to see this important piece of legislation passed with broad support in the Verkhovna Rada [Ukraine's parliament].With this move, Ukraine took an important step towards achieving the European future its people demanded during the Revolution of Dignity.”

Spokesperson Nauert welcomed the statement of Christine Lagarde, Managing Director of the International Monetary Fund, who announced that she and Ukrainian President Petro Poroshenko had agreed the law needed to be amended to ensure the court would hear “all cases under its jurisdiction,” including appeals of existing corruption cases. “These steps,” concluded Ms. Nauert, “will ensure the court is able to help roll back the corruption that threatens Ukraine's national security, prosperity, and democratic development.”