Update Required To play the media you will need to either update your browser to a recent version or update your Flash plugin.
By VOA
Oct 22, 2017


Cambodian Prime Minister Hun Sen's government took legal steps to disband the Cambodia National Rescue Party, or CNRP. The U.S. is also deeply concerned by the National Assembly's passage of amendments to Cambodia's Election Law. “If ratified, these amendments, in conjunction with the lawsuit by the Cambodian Ministry of Interior to dissolve the CNRP, would effectively disenfranchise the millions of people who voted for the CNRP in the 2013 and 2017 elections,” said State Department spokesperson Heather Nauert.

If the main opposition party is disbanded, Hun Sen's government plans to redistribute its 55 seats in the lower house of the National Assembly to five political parties that didn't win any seats in the 2013 general election. 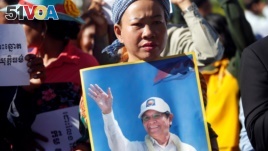 In a statement, CNRP lawmakers - all of whom boycotted the legislative session - called the approval by ruling Cambodian People's Party members of parliament an “abuse of power ... [and] the will of the people.”

This is part of a trend by the Cambodian government to stamp out dissent from all sources, including the press. Recently government authorities shuttered an English-language newspaper, The Cambodia Daily, for allegedly not paying a large tax bill.

More than a dozen radio stations that broadcast dissident voices or used programming from the Voice of America and Radio Free Asia were forced to stop broadcasting for alleged breach of regulations.

“Genuine competition is essential to democracy and to the legitimacy of the 2018 national elections,” said spokesperson Nauert.“History proves that suppressing legitimate political activity leads to more long-term instability, rather than less. We urge government officials to consider the serious implications of their recent actions and we renew our call that the leader of the CNRP, Kem Sokha, be released from prison.”