Update Required To play the media you will need to either update your browser to a recent version or update your Flash plugin.
Joe DeCapua
March 13,2015


Scientists have known for some time that storms generated over West Africa can become hurricanes. But a new study hints at which storms will actually do so and threaten the U.S., Canada and Caribbean nations. The findings could lead to earlier warnings that could save lives and protect property.

Colin Price has been studying thunderstorms over West Africa for many years and has a particular interest in lightening strikes. Africa is a hotspot for those.

Price, a professor of Geo-sciences at Tel Aviv University, said, “It’s not something new that hurricanes basically form out of thunderstorms over Africa. You get what’s called African easterly waves – waves in the atmosphere. And some of these waves -- you can think of them like waves in the ocean – some of them will become unstable and will break. The breaking process will be like developing clouds and thunderstorms. Other parts of the waves will be more mellow and just keep on going in the atmosphere, and nothing really will develop out of them.”

He said those waves move from East to West. 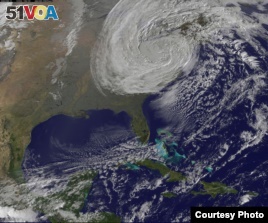 “They get pushed by the trade winds into the Atlantic. And about 10-percent of those waves develop into hurricanes. We’ve always been interested in finding out what’s so special about these waves, which will continue to develop and become strong and form hurricanes, eventually.”

“Well, what we found in this research paper is that when we look at the cloud cover – satellites in space can look down at the amount of the area covered by clouds and the clouds are generally the tops of the thunderstorms – we saw that the larger the area covered by these thunderstorms the larger the chances we have of developing into hurricanes in the next week or two. And there’s also a connection, a link, between the amount of cloud cover and the intensity of the storms a week later,” he said.

About 50 West African storms were studied over a six year period between June and November. That’s hurricane season. But Price says a lot more storms would need to be followed to confirm the findings for reliable weather forecasting.

Price and his colleagues focused on powerful storms over Senegal.

“Ten, twenty degrees North. That’s basically the latitude band where these thunderstorms develop and where these waves and disturbances move out over the Atlantic. And that’s right around where Dakar is. So, Dakar in West Africa is the best location in that region to look for the cloud cover.”

He said a number of factors could weaken powerful storms leaving Africa.

“If the hurricane goes over a cold patch of water, or its gets diverted to colder sea surface temperatures, then things may due out. It may peter out [slowly go away]. If we also have what we call wind sheer in the atmosphere – where the winds are in different directions as we go up – or in different speeds as we go up – that tends to kind of tear the storm apart. The less difference we have with the altitude in the winds, both direction and speed, the better it is for the hurricanes to remain as one system and remain intact for a week or two,” he said.

Dust from the Sahara Desert could also mix-in with the storm, bringing dryer air to the system. Price said there are variables yet to be discovered that affect a storm’s intensity.

The West Africa storms are studied with the use of geostationary satellites. They orbit the Earth at the exact speed of the planet’s rotation. So the satellites are always looking at the same point on the Earth.

“We get an image every 15 minutes of the day, which is the whole hemisphere. It includes also parts of the Atlantic and the whole of Africa, parts of Europe. Non stop images. And we only use the ones in the six month period of the hurricane season,” he said.

In January, Global Weather Oscillations – a hurricane prediction company – said 2015 will have the “most active and dangerous hurricane season in three years.” It’s forecasting 14 named storms with eight of them being hurricanes. It said three of them will be major hurricanes.

Price added that if a hurricane can be predicted two weeks before it actually forms, cities and towns could be much better prepared to deal with it.