Update Required To play the media you will need to either update your browser to a recent version or update your Flash plugin.
By VOA
Apr 23, 2018


The Panamanian government has taken strong action in support of democracy and human rights for Venezuelans. The United States applauds the government of Panama and President Juan Carlos Varela's courageous actions exposing and blocking Venezuelan money laundering in Panama so as to prevent the Nicolas Maduro regime from circumventing international sanctions. 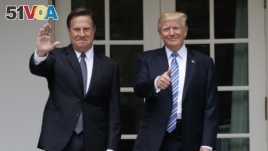 In response, Venezuela halted commercial relations with dozens of Panamanian officials and companies, including Copa airlines, which was one of the few remaining international carriers with service to and from Caracas. In response, Panama recalled its Ambassador from Caracas.

Venezuela's crisis has led to increasing international isolation. More than a dozen other Latin American nations have taken measures against the Maduro regime.

The United States, European Union, and Canada have also sanctioned Maduro and his regime's top officials.

In its most recent of a series of actions to counter corruption in Venezuela, the U.S. sanctioned four current and former Venezuelan government officials on March 19. These individuals were actively involved in the endemic corruption and economic mismanagement that contributed to the historic collapse of Venezuela's economy. Their actions resulted in hyperinflation, food and medicine shortages, and a humanitarian crisis. To date, 60 Venezuelans have been sanctioned by the United States.

The European Union has also imposed economic and travel sanctions on seven senior Venezuelan officials accused of breaching the rule of law.

The United States reiterates that Venezuela must restore democracy, end repression, and open a humanitarian channel to help alleviate the suffering of the Venezuelan people. U.S. sanctions need not be permanent and can be adjusted for those who support Venezuela's return to a democratic and constitutional path.

The United States calls on the rest of the international community to follow Panama's example and stand together against the Maduro regime's corruption and illegitimate rule.