Update Required To play the media you will need to either update your browser to a recent version or update your Flash plugin.
By VOA
Mar 6, 2018


The United States condemns the ongoing military slaughter that the Bashar al-Assad regime, backed by Russia and Iran, is perpetrating against the people of Eastern Ghouta. It is one of the last major rebel-held enclaves in the country, which has been ravaged by war for almost seven years. Since the offensive began on February 18, more than 700 have been killed, and more than 4,000 wounded according to Doctors Without Borders.

After repeatedly delaying the passage of United Nations Security Council Resolution 2401, which demanded a 30-day cessation of hostilities across Syria, Russia has gone on to ignore its terms and to kill innocent civilians under the false auspices of counterterrorism operations, said the White House in a written statement. 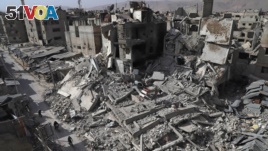 Destroyed buildings in Douma, in the rebel enclave of Eastern Ghouta on the outskirts of Damascus. (March 5, 2018.)

This is the same combination of lies and indiscriminate force that Russia and the Syrian regime used to isolate and destroy Aleppo in 2016, where thousands of civilians were killed.

Since the UN's ceasefire resolution, not only has the violence failed to stop, it has actually escalated, according to Panos Moumtzis, U.N. Regional Coordinator for the Syria Crisis. Indeed, between February 24 and 28, Russian military aircraft conducted at least 20 daily bombing missions in Damascus and Eastern Ghouta from Humaymim Airfield in northwest Syria. “We continue to see more fighting, more death, and more disturbing reports of hunger and hospitals being bombed," Mr. Moumtzis said. "This collective punishment of civilians is simply unacceptable.”

The U.S. calls on pro-regime forces to immediately cease targeting medical infrastructure and civilians as part of the brutal campaign in Eastern Ghouta. The civilized world must not tolerate the Assad regime's continued use of chemical weapons.

The Assad regime, along with its backers in Moscow and Tehran, should adhere to UN Security Council Resolution 2401, cease hostilities in and around Eastern Ghouta, and allow unfettered delivery of humanitarian aid to the nearly 400,000 innocent civilians in critical need.