Update Required To play the media you will need to either update your browser to a recent version or update your Flash plugin.
By VOA
Oct 18, 2017


The United States condemns in the strongest possible terms the terrorist attacks that killed over 300 people in Mogadishu.

On October 14th, the streets of the Somali capital's Hodan district were jam-packed with traffic and by-standers, when a truck loaded with explosives detonated, killing hundreds. Shortly thereafter, a second, smaller explosion, believed to have been part of a coordinated plot with the first attack, took place across town. 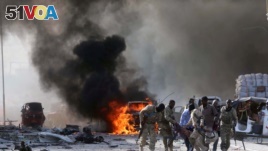 This attack was the deadliest in Somalia's history. In addition to the more than 300 people killed, over 400 were injured and dozens are still unaccounted for.“The two attacks targeted a public, commercial area of the capital and resulted in the death and injury of hundreds of civilians, including United States citizens,” said the White House Press Secretary in a written statement.

While Somali citizens and first responders have responded bravely and generously to the attacks, there are still critical humanitarian needs. Starting on October 17, the United States has begun to deliver planeloads of relief supplies to Mogadishu to assist the victims and survivors.

As the White House Press Secretary noted, “The United States extends our deepest condolences and sympathy to the victims, their families, and all those who have suffered from terrorism. The United States stands with the people and government of Somalia in their commitment to defeating these groups, ensuring the security of their people, and rebuilding their country.”