Update Required To play the media you will need to either update your browser to a recent version or update your Flash plugin.
By VOA
Apr 5, 2017


U.S. officials have condemned the bombing in St. Petersburg, Russia, that has left at least fourteen people dead and scores injured.

The bomb – believed to be a home-made device filled with shrapnel-- tore through a subway car April 3. A second explosive device reportedly was found at a near-by subway station, but it was disarmed by authorities. 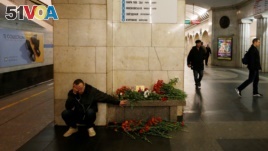 Russian President Vladimir Putin said all possible motives, including terrorism, are being investigated. No individual or group has claimed responsibility for the attack.

At a lunch meeting in Washington with Egyptian President Abdel-Fattah al-Sisi, President Trump called the bombing in St. Petersburg “terrible.” White House Spokesperson Sean Spicer said, “The United States condemns this reprehensible...act of violence. Our thoughts and prayers are with the injured and with the Russian people as we extend our deepest condolences to the loved ones who have been killed and injured.

“Attacks like these on ordinary citizens just going about their lives remind us that the world must work as one to combat violence in all forms,” he added. “The United States is prepared to offer assistance to Russia that it may require in investigating this crime.”

State Department Acting Spokesperson Mark Toner issued a written statement also condemning the attack and expressing condolences to the loved ones of those killed and injured. U.S. Permanent Representative to the United Nations Nikki Haley in a statement called the “images of lives lost and people injured in St. Petersburg...heartbreaking.”

Ambassador Haley said, “The United States will stand with Russia on defeating these extremists who continue to senselessly harm innocent people.”