U.S. Will Continue Welcoming and Caring for Refugees

The new limit of 45,000 refugees is lower than in recent years. It takes into account a number of factors: the security of the American people; the government's capacity to properly vet the refugees according to its enhanced security procedures; and the backlog of hundreds of thousands of asylum cases the Department of Homeland Security currently faces from people who have already come into the United States and are seeking protection. 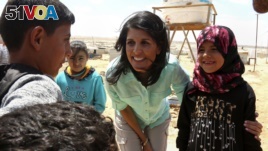 Since 1975, the U.S. has welcomed more than 3 million refugees. With the new ceiling limit, the United States will continue to permanently resettle more refugees than any other country, and will keep offering protection to the most vulnerable of those who have been persecuted because of race, ethnicity, political opinion, nationality, religion, or membership in a particular social group.

It is also important to note that refugee resettlement is only one part of the U.S.'s response to the global crisis of forced displacement. The U.S. remains the world's leading donor of humanitarian assistance, providing over $7 billion dollars last year. During the 2017 fiscal year, the U.S. provided more than $1.4 billion dollars in humanitarian assistance for the Syria crisis, and more than $581 million for Iraq. In addition, the U.S. has given nearly $2.5 billion for people from countries facing famine, and nearly $104 million for displaced persons in Burma and the region. We are also the number-one contributor to the Office of the United Nations High Commissioner for Refugees and continue to be the leading donor to other agencies to provide life-saving support for refugees and conflict victims, including the Red Cross, Movement, the World Food Program, UNICEF and a wide range of nongovernmental humanitarian organizations.

This support provides vital assistance to refugees and conflict victims close to their home countries with a view to enabling refugees to return to their homes voluntarily and in safety, when conditions permit.

The United States takes pride in its humanitarian efforts and goals, and will continue to care for people around the world who are fleeing violence and persecution.