Update Required To play the media you will need to either update your browser to a recent version or update your Flash plugin.
By VOA
Jun 30, 2018

The United States reiterated the urgent need to identify the source of the attacks on U.S. diplomats and to ensure they cease. The U.S. also reiterated that until it is sufficiently safe to fully staff our Embassy, it will not be able to provide regular visa services in Havana. 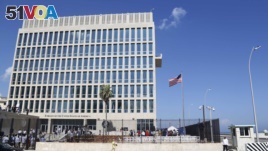 The U.S. expressed its continued concerns about the arbitrary detention of independent journalists and human rights defenders. The United States acknowledged progress in repatriating Cubans with final orders of removal from the United States, but emphasized Cuba needs to accept greater numbers of returnees.

The delegations also reviewed other areas for engagement that advance the interests of the United States and the Cuban people including combatting trafficking in persons; facilitating safe civil aviation; law enforcement cooperation; agricultural cooperation; maritime safety and search and rescue cooperation; resolution of certified claims; advancing understanding of environmental challenges; and protecting the national security and public health and safety of the United States.

The Bilateral Commission last met in September 2017. The delegations agreed to hold the next rounds of the biannual Migration Talks and the Law Enforcement Dialogue this summer.